This post originally ran in the Hype Orlando in December 2016. It has since closed and I’m reprinting it here on Pearl Harbor Day, 2019 along with some haiku and tanka I wrote during my first trip to Japan. I used my photographs on a recycled book to make a haiku book while I was there. A few of these are printed here.

My grandfather died in Japan during World War II. Opa Straub was captured in Java in the Dutch East Indies, then a colony of The Netherlands, in 1942 when the Royal Dutch Army capitulated to the Japanese invaders. He died a POW after forced labor at the POW hospital Shinagawa outside of Tokyo of beri beri and intestinal cancer in 1943. His brother, Emil, survived the Death March of Bataan. 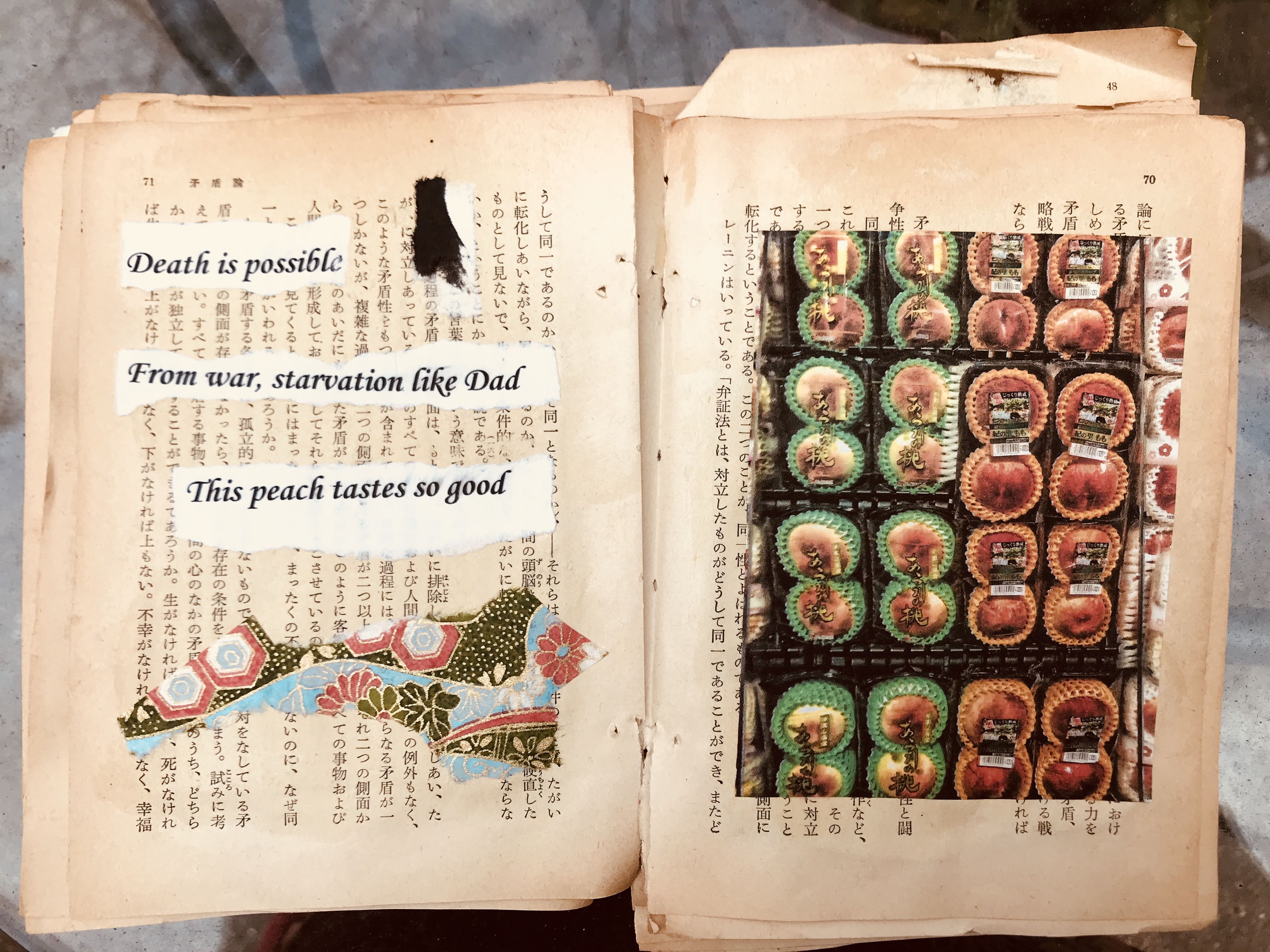 My mother insisted that if we had not dropped the two atomic bombs in August 1945 that ended the war, I would not be alive, for the war would have dragged on, and my father likely would have died in the camp. My Uncle Charlie, who fought in the Pacific, would likely have died too, she said. 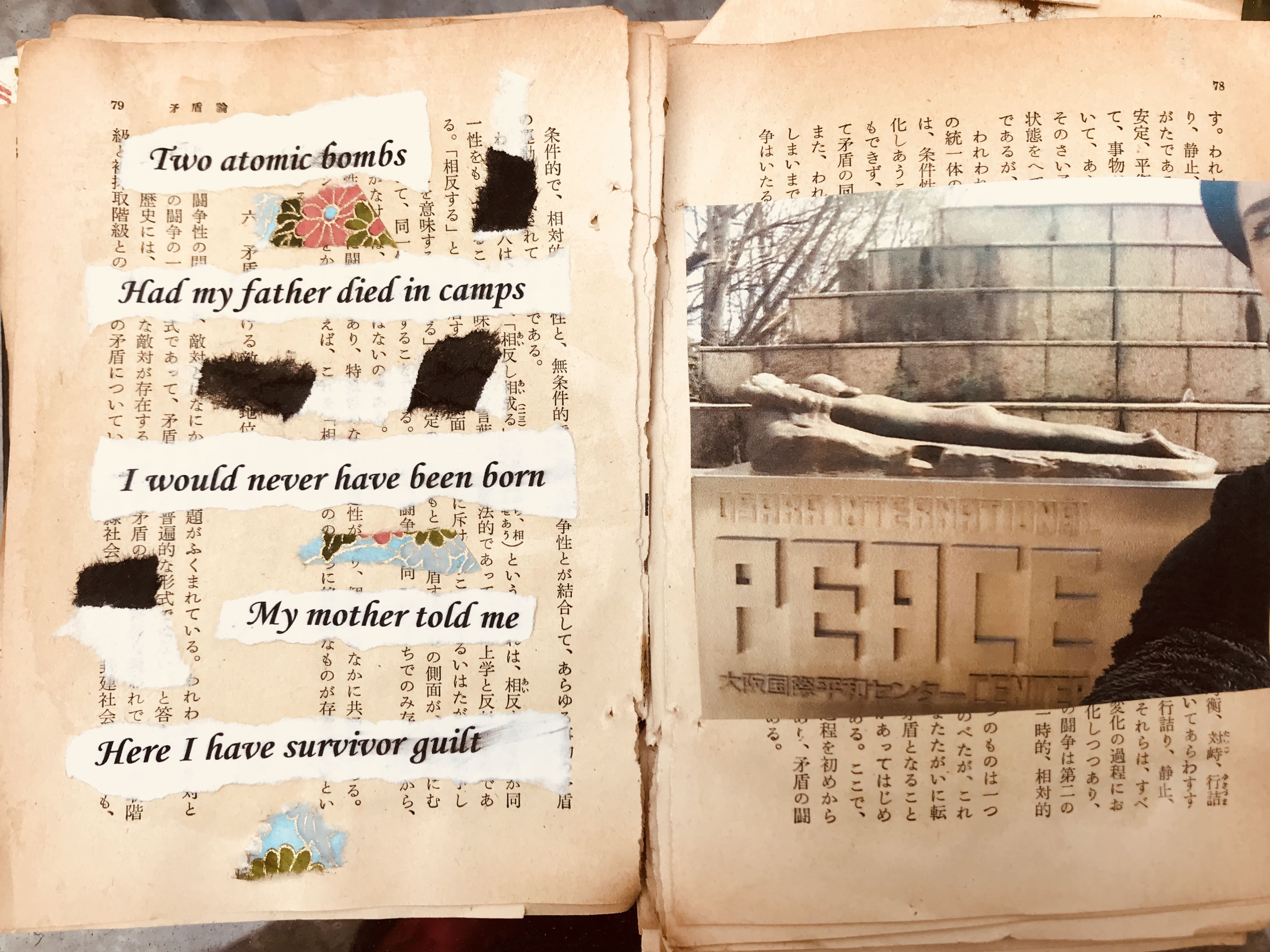 I understood this reality of the war, yet was conflicted. Because growing up in Boulder, Colorado in the 1970s and 80s, there were candlelight vigils held annually to call for peace and commemorate the deaths of civilian casualties in Hiroshima and Nagasaki that were estimated to be nearly 200,000. Back in those days in Boulder, my mother got on panels and vigorously defended the position that it was right to drop the bombs and end the war to save lives and defeat the Japanese aggressors who were using Kamikazi pilots to kill people.

I never imagined that I would find myself traveling to Japan, yet here I am. My partner brought me to Osaka because he was transferred for work. He proposed marriage to me here, and we have been traveling a bit. Walking the streets of Japan, I look at people’s faces, especially the elderly. I wonder, do they remember the war? What do they think of Americans? Sometimes I feel my grandfather’s ghost walking beside me. A man I never knew except for a portrait above my father’s bed.

My father always said you must forgive. That is the only way to survive. I heard his stories of the camps and Japanese atrocities over the years, and asked his older sister, Len, for stories.  I remember her letter included none. “If I were to tell you stories I would never be able to stop crying,” she said. Instead she reminded me of the thousands of wars and bombings going on right now around the world. Indeed, war continues. Who is right and who is wrong?

As Pearl Harbor Day approaches, the newspapers are filled with accounts. Both sides seem to recognize the futility of war and the need to prevent it. President Barack Obama visited Hiroshima in May, the first sitting U.S. president to set foot in Hiroshima. He visited the Hiroshima Peace Memorial Museum and signed the guest book. He also laid a wreath at the cenotaph in Hiroshima Peace Memorial Park, which commemorates the victims of the atomic bomb the United States dropped there in 1945. 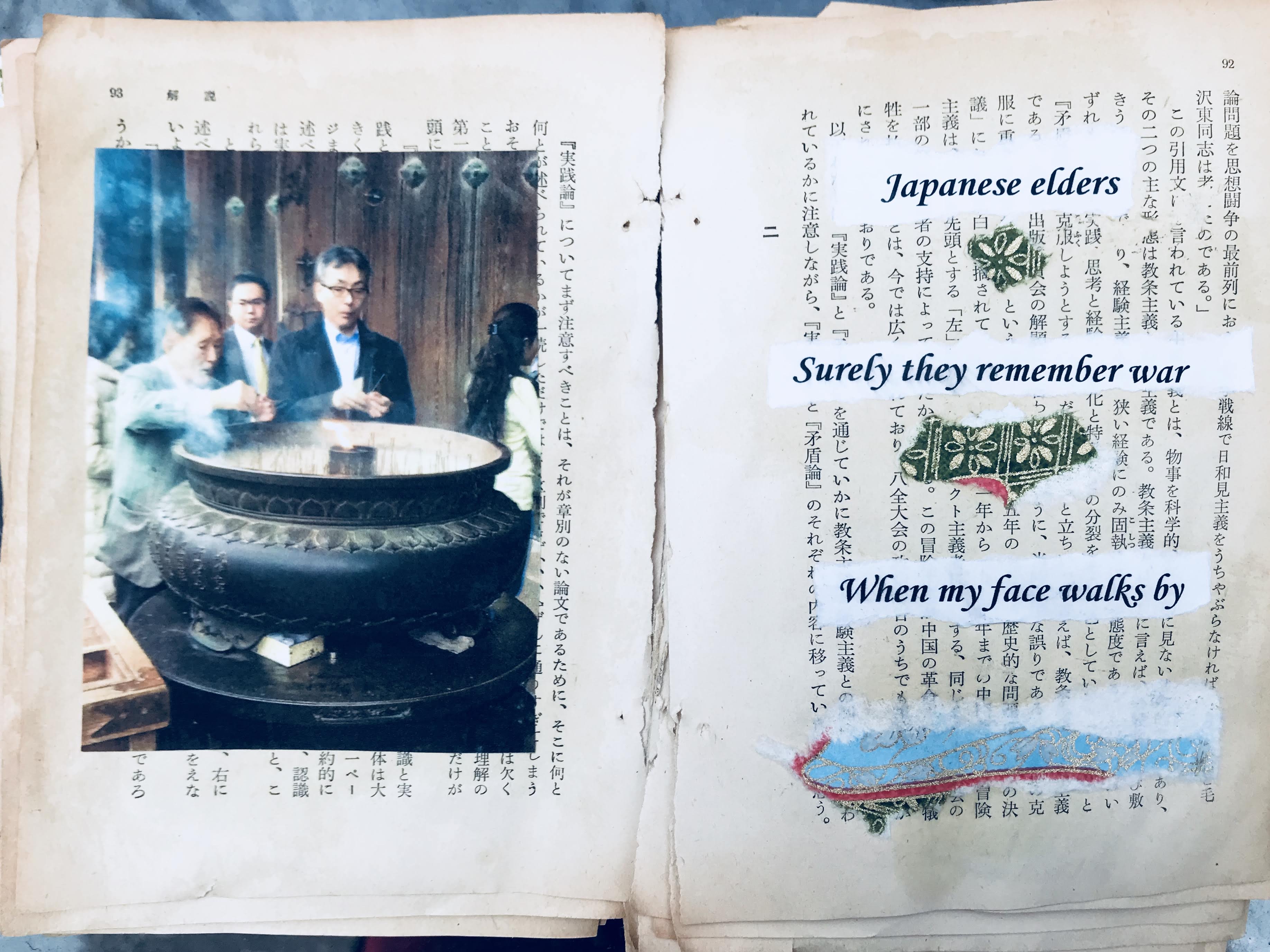 “The world was forever changed here, but today the children of this city will go through their day in peace,” Obama said. “What a precious thing that is. It is worth protecting, and then extending to every child. That is a future we can choose, a future in which Hiroshima and Nagasaki are known not as the dawn of atomic warfare but as the start of our own moral awakening.” 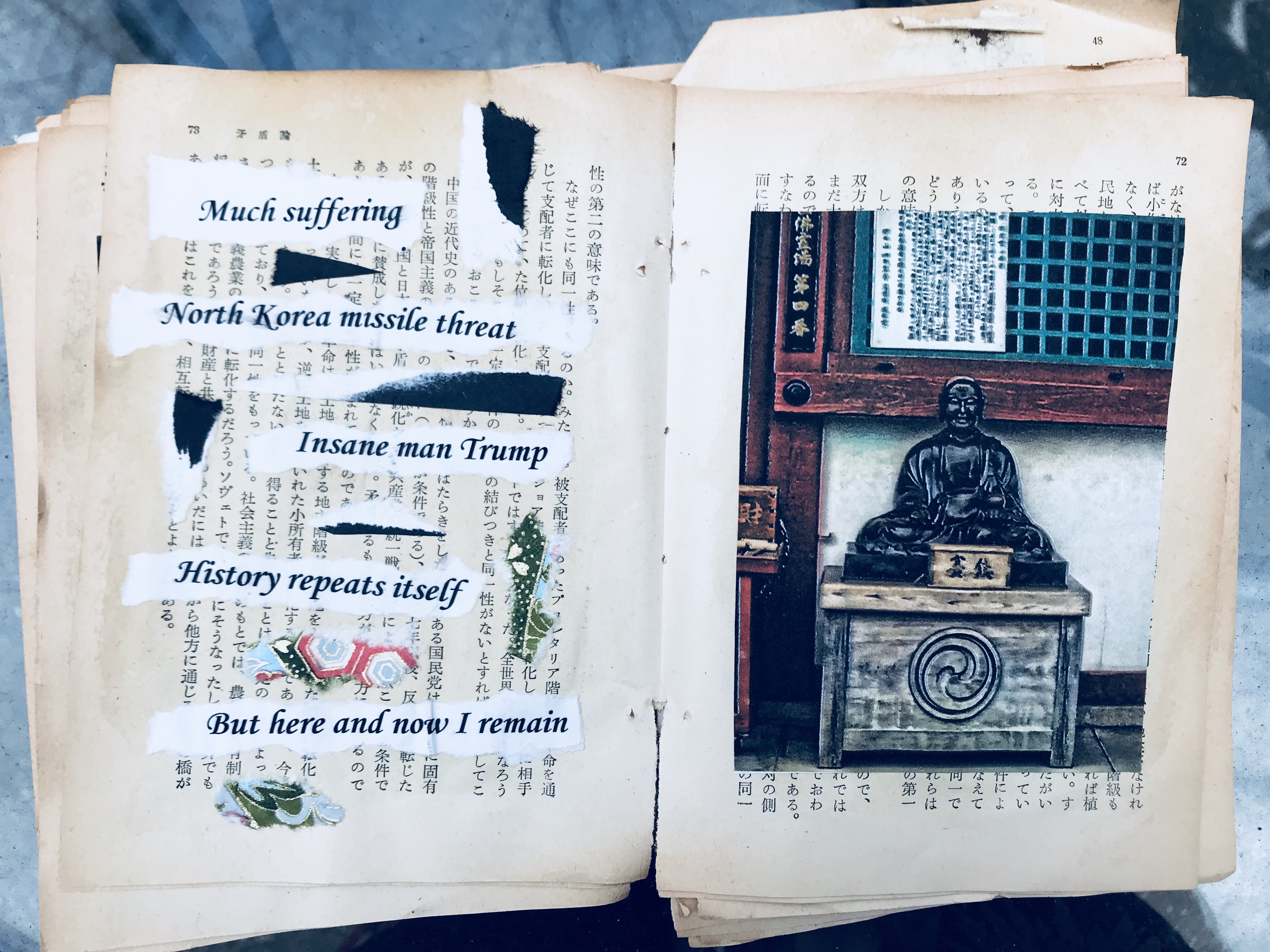 Last year Mitsubishi formerly apologized for using American POWS for forced labor during the war.  Japanese Prime Minister Shinzo Abe said Monday that he will visit Hawaii on Dec. 26-27 to mourn the victims of the 1941 attack on Pearl Harbor with President Obama.

“I hope to show a resolve toward the future never to repeat the tragedy of war again,” Abe said.

My family’s story and my mother growing up taught me to hate the Japanese and be righteous, but I cannot. True, the Japanese committed horrible atrocities.  But on the faces of people I see passing in the street on my visit in Japan, I do not see the politicians of war. I see only people: men, women, children — people caught up in the savagery of politics and economics. Things we all on this planet have no control over as men who have no experience on the battlefield and horrific reality of war carelessly send soldiers to die to once again get into war for profit.

We can go back and forth to blame who was the aggressor and at fault in World War II. The attack on Pearl Harbor was terrible, and I remember my mother taking us to see the memorial in Hawaii when I was in high school. I remember the soldiers who lost their lives, and I salute and honor them.

But the most important thing for me about Pearl Harbor Day looking at things from here in Japan is to remember and learn from history, because we know that failure to do so dooms us to repeat it. 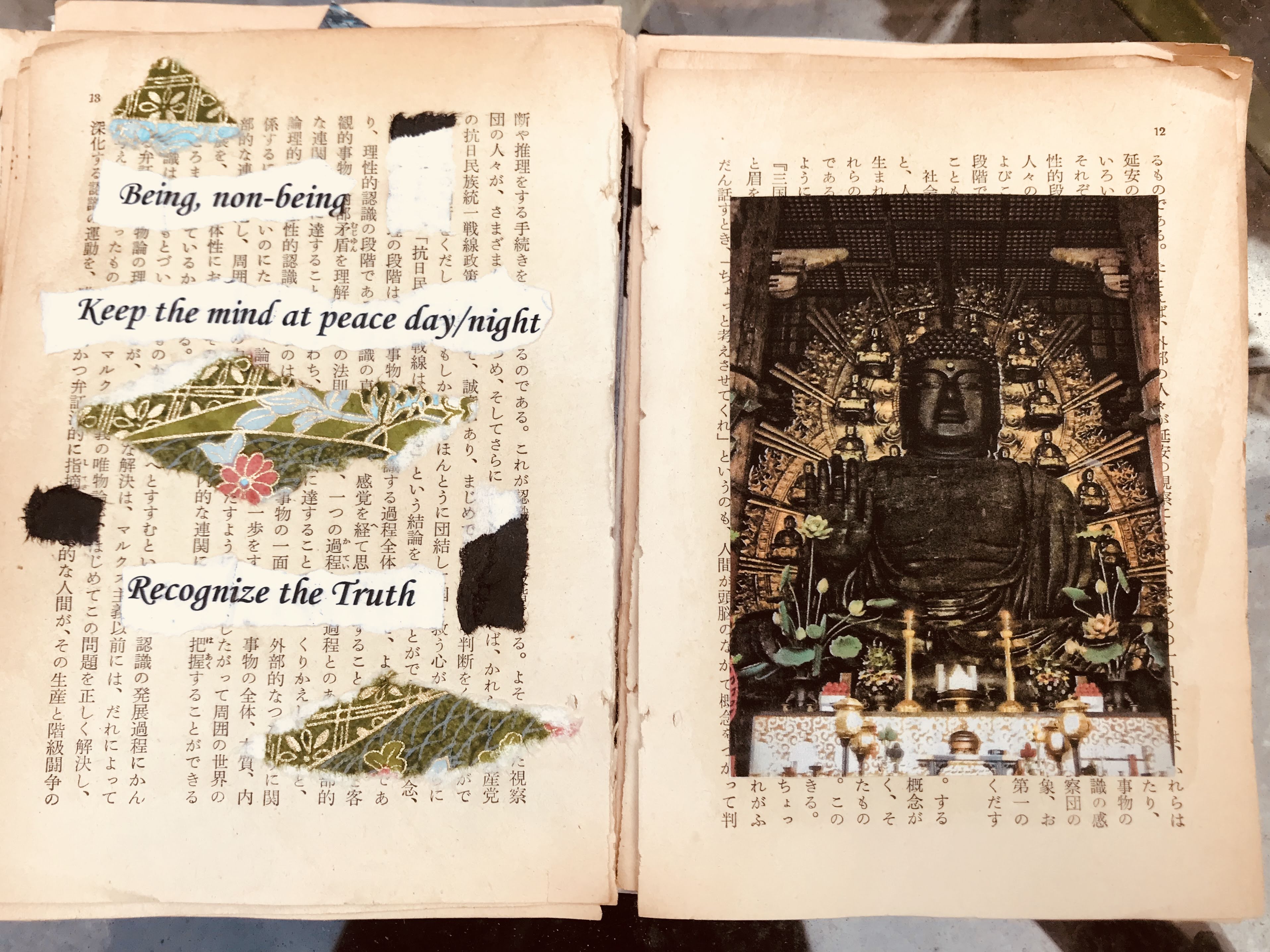 For what I never heard was the Japanese side of the story. I heard the horrors of what the Japanese did. But what about my own country? I didn’t even know about the British and U.S. bombing Dresden, Germany in February 1945 that killed 25,000 civilians until I read Kurt Vonnegut’s Slaughterhouse 5.  And as for Pearl Harbor, did the U.S. want to get into the war? It is odd that it moved all its aircraft carriers out of Pearl Harbor right before the attack. Japan bombed Pearl Harbor and killed so many, yet the U.S. imposed sanctions on Japan that cut off their resources and forced them to invade.

Japan was a U.S. ally in W.W. I and it obtained Germany’s Pacific possessions. Japan became victims of racism among fear of its increasing power, and was angered by the failure of the Allied powers to agree to a clause on racial equality in the Treaty of Versailles that ended World War I (although the intention was to have the world recognize that Japan was equal to the West, not to provide equality to, say, China and Korea).

I love my country. It does what it needs to protect itself, and I commend the brave soldiers, like my grandfather and my father, who served in the Dutch and U.S. armies. I do believe that our own policies, however, such as the search for resources and ever expanding markets, play a part in aggression and destruction and are at the root of war.

I think the mass killing of civilians in any war is wrong, and I believe torture is wrong. People held without trial for 14 years and then being sodomized and rectally forced fed is not becoming to a moral society but blemishes America, lowering it to the barbarianism equal to its enemies.

Wars rage across the world and we live in dangerous times. And it comes down to a dominator system. When we can recognize the roots of war in domination, domination that goes back even to an evolutionary stage, we wonder what can be done. A better way that other evolutionary sources point to is a partnership model of a cultural system. That is it not domination over but partnership with that we can begin to heal the wounds of war and build a new society for a golden age of peace.

Scholar, activist and founder of the Center for Partnership Studies Riane Eisler says, “In sum, the struggle for our future is . . . the struggle between those who cling to patterns of domination and those working for a more equitable partnership world.”

The future is clear. War will never end unless we end the aggression of domination. It will end when we choose to develop the qualities that aggression has oppressed, the nurturing, caring, loving qualities of humanity that are waiting within to flower once again and bring peace to the world. 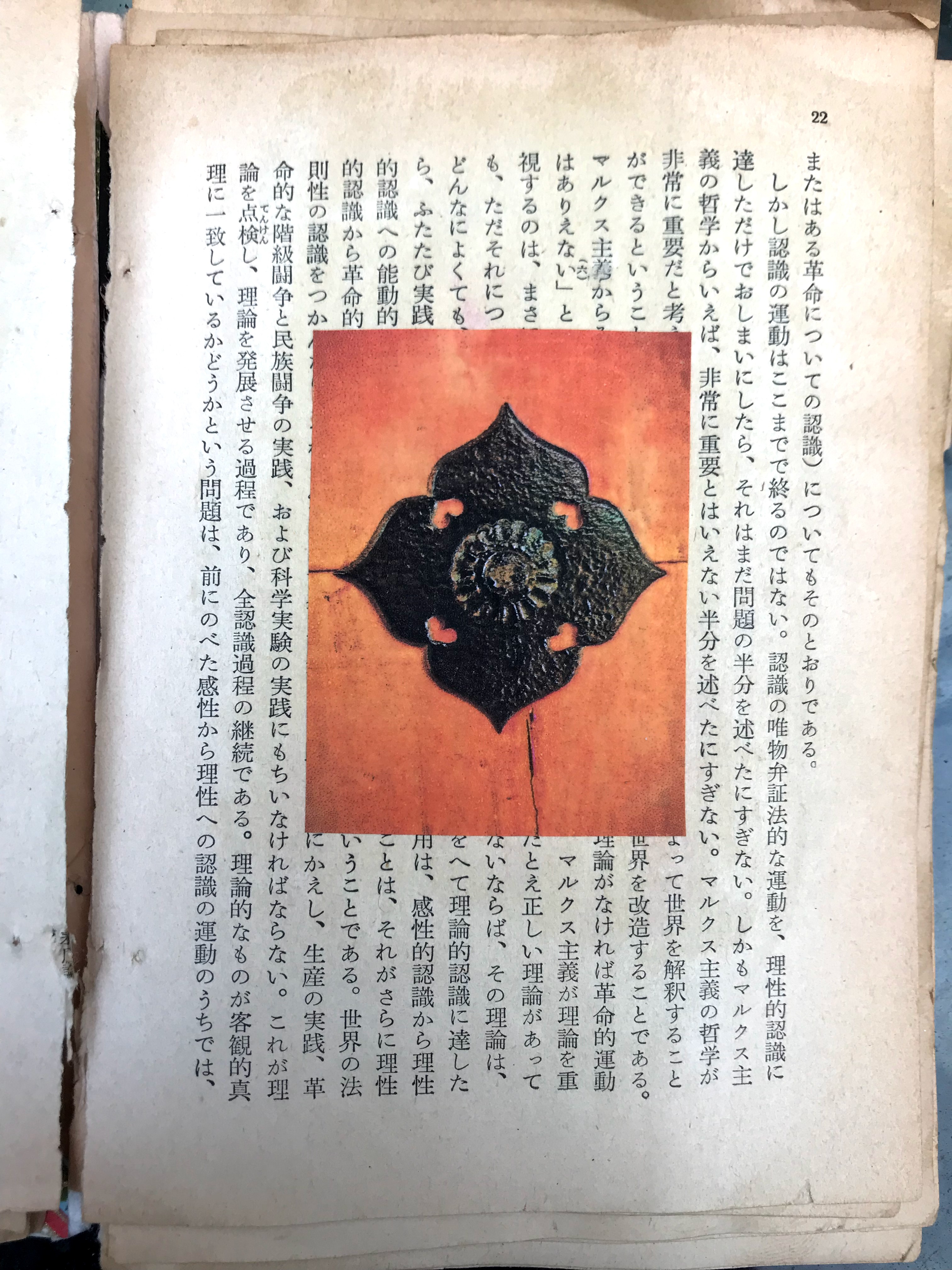 This starts in our own homes. To love and care for one another rather than bully, dominate and threaten. To protect and nurture children as our greatest resources, rather than go to war for oil and other commodities.  “The link between intimate violence in the home and the international violence of terrorism and war is as tightly bound together as the fingers of a clenched fist,” Eisler said.

Teaching children non-violent communication and peacemaking skills to handle difficult emotions is essential. Eisler continues, “Schools in which students and teachers relate as partners-where Rosenberg’s Nonviolent Communication is part of every interaction are communities of learning, rather than top-down, impersonal factories. Young people begin to see school as a safe and exciting place of exploration where they can share feelings and ideas, and where each child is recognized, valued and nurtured.” 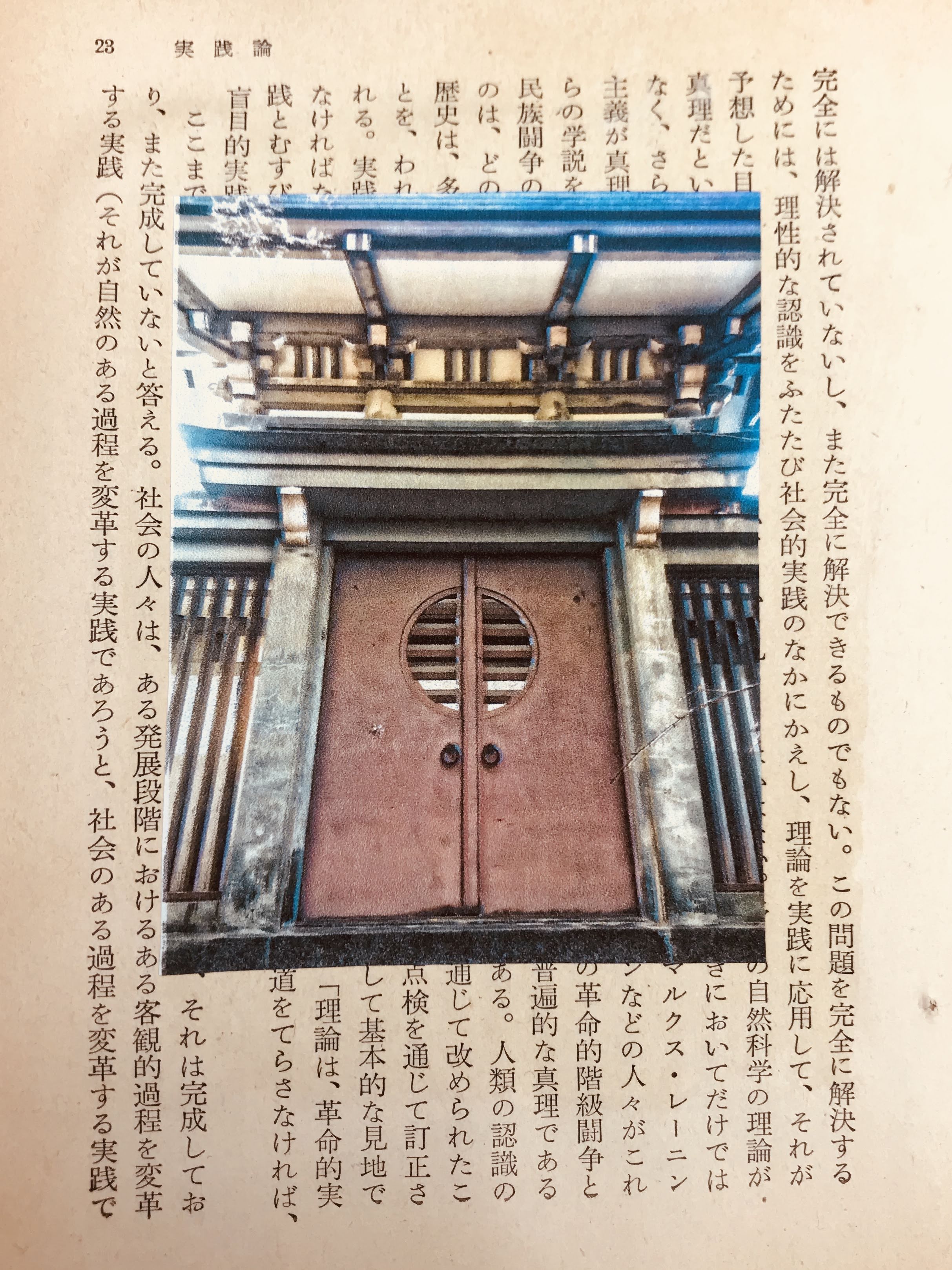 To value the feminine qualities of our psyche that have been imbalanced for centuries will allow men to get out of straightjackets of a story that binds them in violence and denies them the pleasures of life that lead to the senselessness of war. And with Donald Trump as President Elect of the United States, his saber rattling, bulling dominator tactics and recklessness are especially dangerous.

I grew up watching The World at War series on TV with my family. Trump is coming to power on the heels of the same circumstances as Hitler. Never again, we must remember, as history is tragically repeating itself before our very eyes. Stories of dominator aggression are played out in TV shows like Billions, as the economic system in place is about greed, dominance and aggression that needs war to support itself.

But there is a better way. Save lives. End war. Save our soldiers’ lives. Bring them all home to their families and loved ones. This Pearl Harbor Day, remember and honor the dead who have given their lives in service of our country.  Work for peace. It begins with you.

It’s time to get active for peace. Peace for all people. This is what we work for. This is what I think about, as an American in Osaka on the 75th anniversary of the Japanese invasion of Pearl Harbor. I do not have any hate for Japanese people. I do not have hate for anyone or thing or perceived enemy. Not ISIS, not Hillary Clinton, Not Trump. Not even Hitler, who was abused and beaten unconscious as a child by his father. I have only love and compassion. Compassion and love. And a deep desire for peace on Earth.

“If everyone demanded peace instead of another television set, then there’d be peace.” –  John Lennon

Peace on Earth. Good will toward all people.