One thing I became aware of was the military industrial prison complex tentacles that extend to so many vendors and service providers. Notice the Tropical Oil in the background of this employee. The camp was closed Sunday morning June 16 for a while because of heavy rains and lightening warnings. Makes you wonder what will happen when a hurricane hits here. There’s no plan. Hurricane Andrew wiped this place off the map. Genocide? You decide.

The irony that my family was persecuted by the Japanese during World War II and spent years in concentration camps, yet in the 21st Century, it’s the United States that is doing the persecution and making the concentration camps, and I’m living in Japan for a higher quality of life!

While on home leave here in Florida, I’d rather be catching up my blog on all the wonderful things I experienced in Japan. Trump and his horror show, however, just won’t let me.

The United States is separating families of immigrants and refugees in a most inhumane policy,  just as the Japanese did to my father, separating him from his mother and two sisters for two years as a 10-year-old to survive alone during WWII. It causes horrible psychological damage.

Of course this is old news, the United States put Native American children into boarding schools to assimilate kids and wipe out their culture and ancestral connections.

Witness for the prosecution! There will be restitution! Behind me is where they keep the children. Crammed in there, no education, no toothbrushes or soap, can’t afford those, yet the taxpayers pay $775 per child to be kept here! For profit!

And now they are housing migrants at Fort Sill, former site of Japanese-American internment and Geronimo. It seems this is all intentional and the U.S.  is slipping into tribalism with its irrationality under Trump, blood money lust or reporter bashing. It’s also regressing in disturbing sadistic ways. 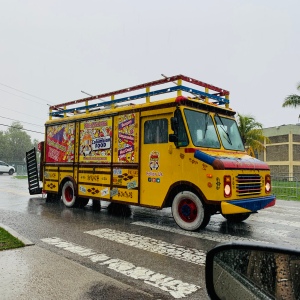 Food trucks part of the military industrial prison complex service. The day I witnessed a woman told me they were applying to be a food truck for the employees. Homestead, Florida food truck

Sen. Lindsey Graham’s bill would reverse a long-standing order on detention dubbed the “20-day rule.” The rule, adopted after the 1997 Supreme Court Flores agreement, which set the nation’s rules for the treatment of immigrant minors in federal custody, says that migrant children, whether they arrived with family or are unaccompanied, cannot be held in detention for more than 20 days. Graham’s bill would instead recommend holding migrant children with their families for 100 days.

Why on Earth do that? Because private for profit prisons get $775 per child from taxpayer money, that’s why!

But there is good news that Bank of America just relented to pressure to stop funding for profit prisons, maybe SunTrust Bank, that is merging with BB&T to become Truist Bank, will follow suit. Read my boycott Truist Bank blog post here! Your voice and pressure has been making this happen! Thank you! 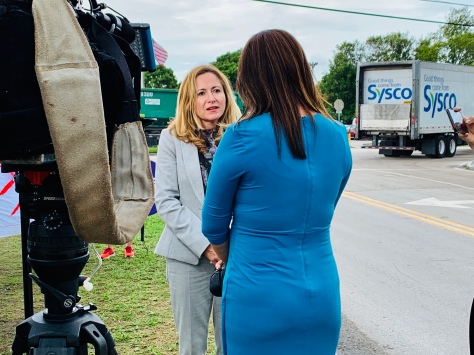 Rep. Debbie Mucarsel-Powell came to see the prison after being turned away prior. She can’t get a hurricane plan. Notice the Sysco truck in back of her! All collaborators! Profiting from taxpayers

I went to Homestead on Father’s Day to witness for myself. How could I not? Ancestral trauma reactivated in my DNA led me there. There was a mass protest that day.

More than 300 people showed up, although heavy rain kept the more than 800 who had RSVPd away, but not the message!

I drove down and spent the night before getting there at 9 a.m. to meet others. It was pouring rain, and lightening is a hazard too. I was horrified, traumatized, to see this concentration camp actually happening.  But I was among so many amazing, loving, powerful activists. I learned so much! We shall overcome just as we always have! 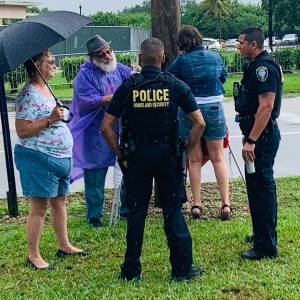 I arrived early to witness, but the march didn’t start until after 2:30. I spent all day in the rain with the march. It was a fabulous turnout, and it got a lot of press, as people are waking up to this horror that it their country and realizing that being silent is complicity.

Democratic candidates are flooding to Homestead to witness this atrocity. Another march is July 12 for the nationwide Lights for Liberty.

This is what we live for! It’s showtime! Get up and be there or at your local chapter event! I will be there! This time I will be also stopping at Miramar, Florida, where just like the Nazis forced Jews, immigrants are forced to line up in the sweltering Florida heat at the ICE there and report.

Homestead for profit child concentration camp. My father’s story. why repeat the crimes of history? The trauma and psychological scars lasts for generations. We grew up in sorrow. My youngest sister committed suicide.

Here are some of my photographs from the June 16, 2019 Father’s Day March. It was hard to protest and photograph and witness, especially in the rain! I’m putting together a film as well.

My signs melted, but not the message! This is my witnessing for the prosecution. Because there will be war crime tribunals. There will be justice. There will be reparations, just like there was for other victims of persecution, including my father. 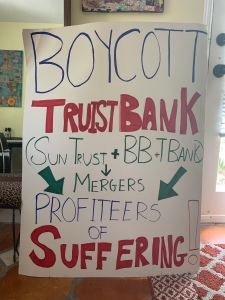 Boycott Truist Bank, SunTrust and BB&T bank merger) that enables Caliburn, the parent company of the for-profit child concentration camp in Homestead, Florida to exist. They had the gall to actually try and make a public stock offering of this crime, until they retracted.It’s remarkable people say nothing. Act like nothing is happening. I understand their fear and maybe have been too traumatized by the past to do anything.

Yes, it definitely can be upsetting, especially when I witnessed the camp and the children, the similar fence my father described, how people would slip them notes at risk of prosecution, the same lack of education, the same milling around doing nothing. Children can’t even touch each other, yet my father at least had back scratching, he said, that soothed each other when despair prevailed. These children have no comfort. It’s cruel.

It’s agonizing. But I always recover. I hold to the center until it passes. Mostly the pain of people’s silence can be mind-boggling. The responses I’ve gotten are because they are afraid or just don’t know or care. But I have compassion for them. I tell them:

Luckily, history is on our side. The battle is already won. Humanity wakes up because people out there care more about children than their next stock trade or McMansion purchase. Because are we humans or are we machines? It’s our capacity to care that exemplifies our humanity. And the United States and the world deserves a caring economy, not a prison economy. 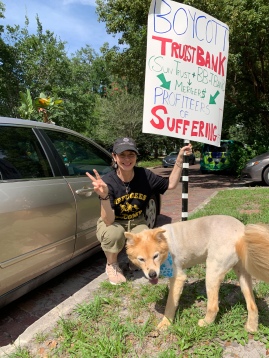 Heading out from Orlando! 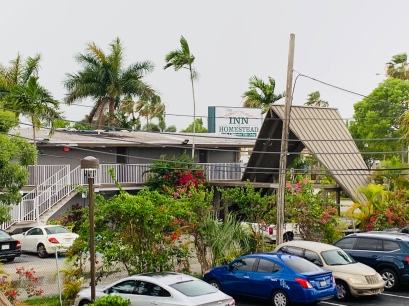 I like staying at dumpy hotels. It can be quite an experience. This one in Homestead, Florida The Floridian. Not far from the camp. There was a CNN story on the news in the breakfast area in the morning. I was wearing my refugees welcome shirt and stood up and told people the camp is just a few miles from here! Go check it out while you still have the right to!

Cops everywhere. Here at the motel.

Does Your Abuela Know You Work Here? Low-skilled employees are paid $16-17 an hour, twice what they’d get at Taco Bell or McDonald’s, their other career option besides the concentration camp. I realize they are victims of the socio economic scam that causes this oppression. I have great compassion for them 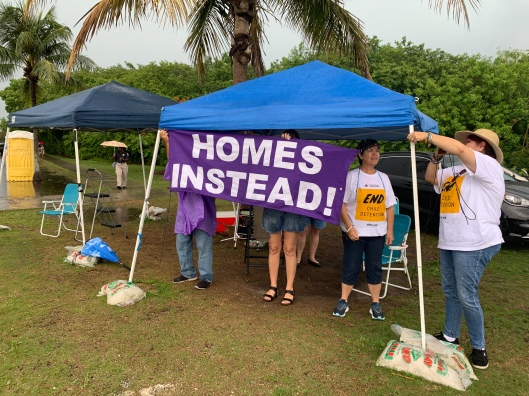 I arrived early and after the rain stopped a bit, more arrived and helped set up. It’s crazy these kids aren’t in homes but in a for profit concentration camp! That’s because it’s genocide, and now Trump wants to deport refugees back to the countries that are murdering them with U.S. trained forces, like Honduras, Guatemala and El Salvador.

Stop separating families! I often imagine what it was like for my grandmother to see my father again for the first time in two years when she miraculously ran into him at a train station in Yogyakarta after the war. 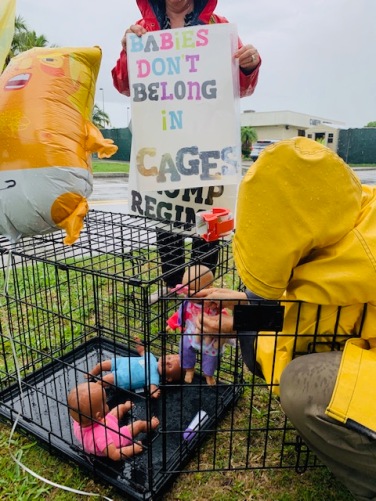 Amazing artists are such great activists! Babies don’t belong in cages. RIGHT?!?!?! Trump is Hitler 2.0. What kind of a person puts babies in cages? A monster! 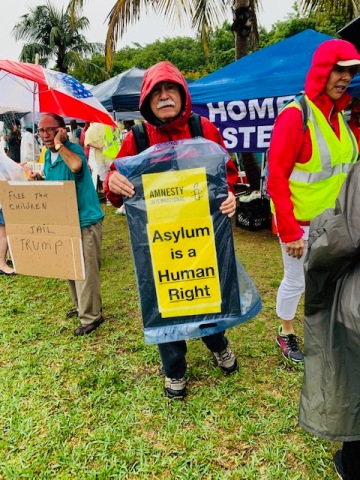 It makes you wonder, if the US, who used to be the good guys, are now committing the crimes, who is going to liberate the children and these camps? We The People are! Asylum is a Human Right!

Really amazing dedicated humanitarians out there! I have faith! 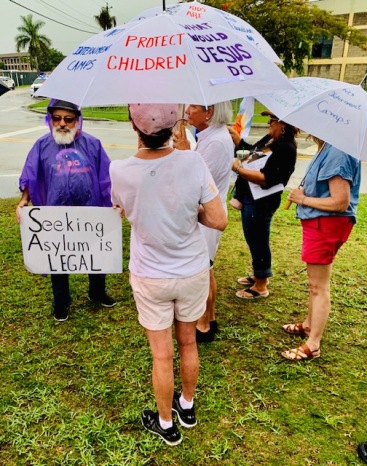 Yes, seeking asylum is legal!!!! Marty is a lawyer and brilliant! Learned so much from him. He’s been there every day!

Alessandra Mondolfi is an artist and amazing activist. Caliburn’s logo is meant to look like a sword and URN as in BURN.

You can witness by standing on a ladder and holding signs, eyes, hearts, waving and more! So heartbreaking to witness!

More collaborators. Witness for the prosecution! 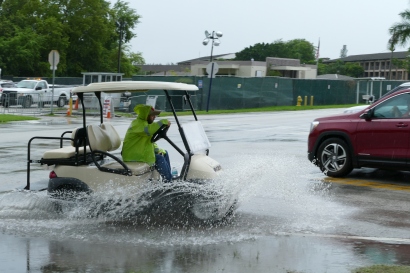 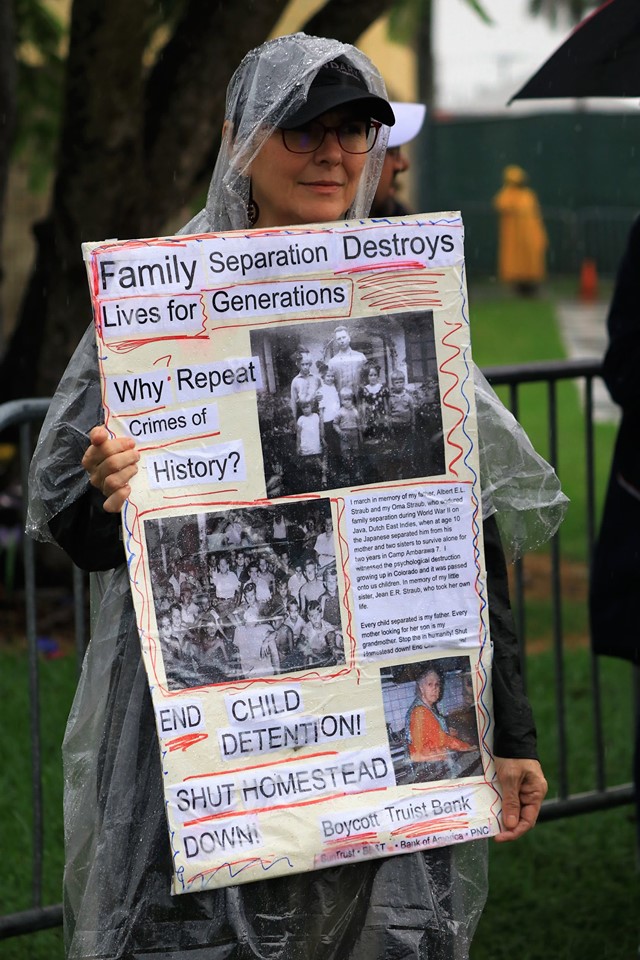