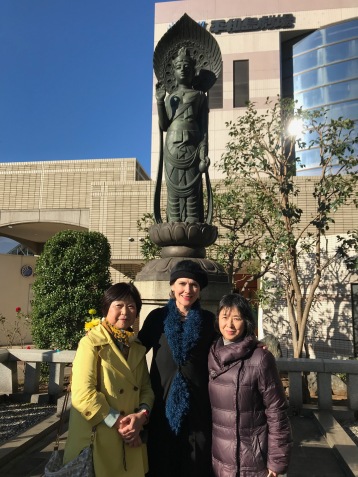 In November 2017 Sasamoto Taeko and Yoshiko Tamura, founders of the Japan POW Research Network, took me on a tour of the sites where my Dutch grandfather was held and died during World War II. Here at Camp Omori where he was assigned. He died at Shinagawa POW Hospital outside Tokyo in 1943 of beri-beri and intestinal cancer. Here Sasamoto-san reads the Japanese people’s wish for peace in front of a statue of Kannon, the Japanese Goddess of Mercy.

Yesterday I posted a visual poem I wrote after visiting the Osaka International Peace Center.

Today as I await Typhoon Tremi’s arrival tonight, I have been going through the various film clips I took when the POW Research Network Japan took me on a tour of the sites where my Opa, Albert Straub, was interned after being captured on Java, Dutch East Indies, in 1942, during World War II.

He was taken on a Japanese “Hell Ship”  to Tokyo where he then labored on the railroads before falling ill 11 days later and taken to Shinagawa POW Hospital. He died of beri-beri and intestinal cancer in 1943.

The Research Network revealed to me his story and details of what happened, Before, all I ever knew about my Opa was a picture above my father’s bed.

Touring the sites and the vast information they gave me was incredibly healing. It was also traumatic, as I’ve only been able to process the grief now and realize the work to be done.

The Japanese people want peace. The whole world wants peace. Japan leads the way with Article 9 in its Constitution, that renounces war. What a concept! On Friday, Malaysia’s Prime Minister Mahathir Mohamad said Friday that Japan’s pacifist Constitution stands out in the world for embodying peace and should be emulated, not revised.

I contacted the Network again and they reiterated their commitment to keeping Article 9 in Japan’s Constitution. Everybody is getting involved for peace. It is urgent that people around the world raise their voices for peace today. Which ever country you live in, may we all work for peace. Before it’s too late.

Peace, Peace for the children!

I will be posting more about my Mythic Yoga Journey to Shinagawa, the Network’s work and the story I was revealed.