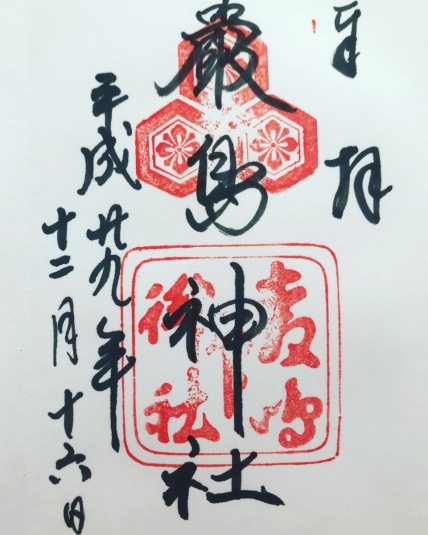 “More feeling,” my Shodō 書道 teacher, Noriko Ukita told me after showing her my work of the Kanji symbol for heart, kokoro. “More movement. Too stiff.”

Indeed, her words made me realize how stiff I was practicing Japanese calligraphy in some of the first classes I took with her at Community House and Information Center in Kobe (CHIC) since September.

Working with the eight basic types of brush strokes and dots of varied thickness – to create a piece that is a blend of balance and harmony with strong strokes and delicate lines, I was stuck in my head, my body frozen. “More feeling. More breath!” 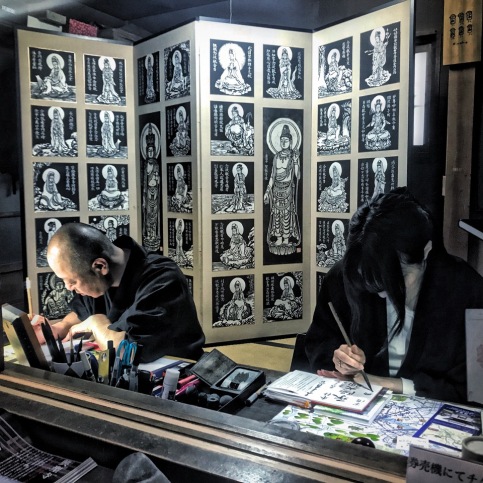 Over-thinking how it and things should be rather than as they are, my mind grasped for perfection.

My mind wanted to get it just right, have an end result, to try and think and understand rather than to just breathe, feel and use my inner energy, ki, to guide the movement of the brush strokes, as Noriko taught.

In these classes, I had started with the Kanji word for eternity, ei, to learn the eight basic brush strokes, or eight directions, or eijihappo. I had progressed to peace, heiwa,which my frustrated heart/mind found none of yet.

Working with heart/mind, kokoro, in this class, my mind then churned over powerful memories of old wounds of childhood arising, “I’m stupid. I should just give up.” 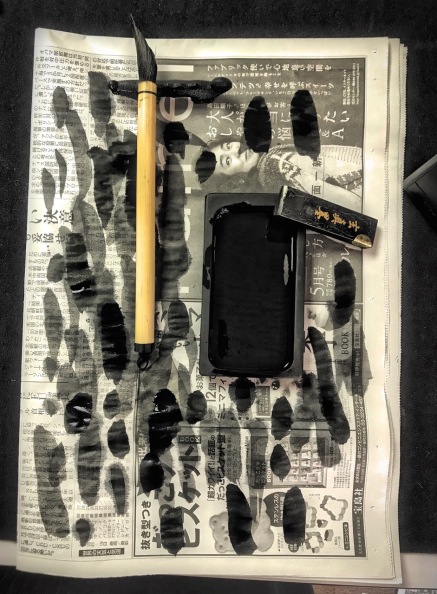 My sumi stick, fude, fudeoki and suzuri at Shodō class.

It was amazing watching my negative thoughts as I texted and complained to my husband, “I quit! I’m going to try Ikebana!!!! :(:(:(.” Because after that expressive rant, I felt better.

I didn’t quit. I persisted. This art-form that is also a way of life and has its own philosophies was working its power on me. It was all very Zen.

Traditional ways of calligraphic symbols transfer are laconic: they are written on a white paper which personifies emptiness in Zen philosophy, and black signs on a white background seams concepts of Yin and Yang as female and man’s origins. 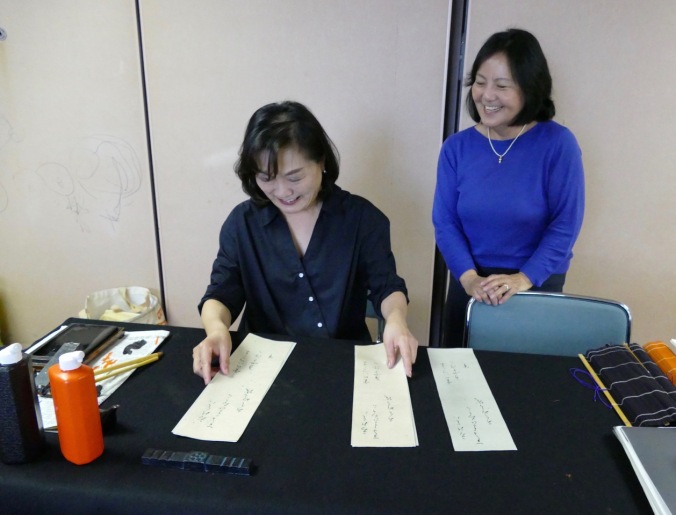 Noriko Ukita with student Ayako Miyama.
She has been Shodo about 15 years and working on a Japanese poem ( Kana ) at Community House and Information Center in Kobe, Japan.

There is a way of calligraphy, a way of writing Shodō where Sho means the calligraphy, do means the way. It is also one of ways leading to comprehension of life’s meaning and eternal truths. 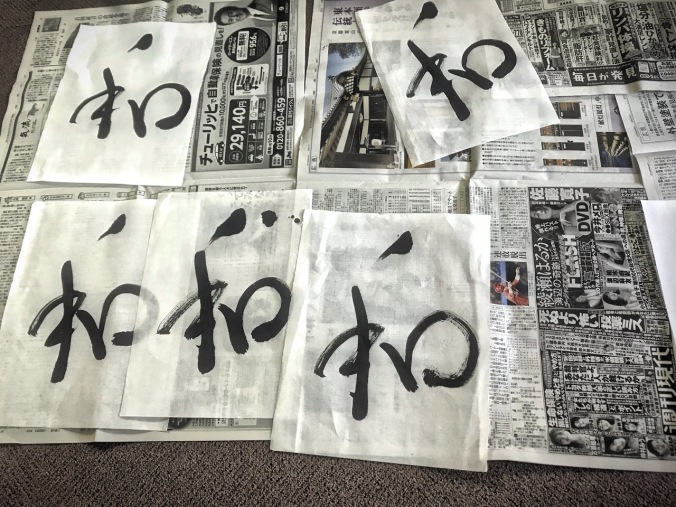 My Shodō work of one of the Kanji symbols for peace.

In the book, Zen Mind Beginner’s Mind by Shunryu Suzuki, Richard Baker writes in the forward that, “The Zen way of calligraphy is to write in the most straightforward, simple way as you were a beginner, not trying to make something skillful or beautiful, but simply writing with full attention as if you were discovering what you were writing for the first time; then your full nature will be  in your writing. This is the way of practice moment after moment.” 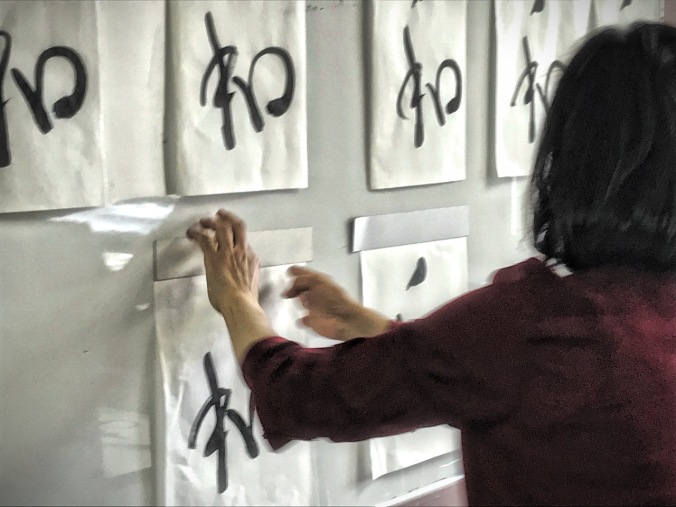 Noriko narrowing down my Shodō work to the best one.

In addition to practicing being in the moment, I was attracted to Noriko’s Shodō classes because I love writing. I love paper and ink. I love watching Buddhist monks and Shinto priests and Miko use Shodō to put the temple stamp, go-shuin, in my temple stamp book, go-shuincho. And I love language. 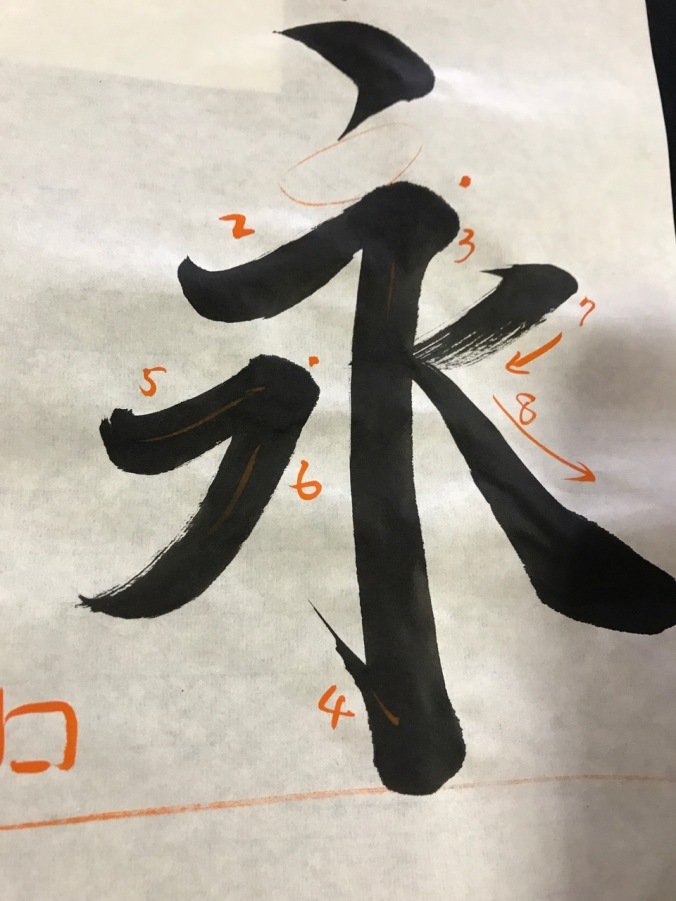 Noriko’s orange brush strokes and numbering on her Shodō piece of the Kanji symbol for eternity teach me the elements of the strokes and breath.

My husband and I have been learning Japanese, remarkably, and I’ve started to equally remarkably, learn Kanji, starting with these Shodō classes. 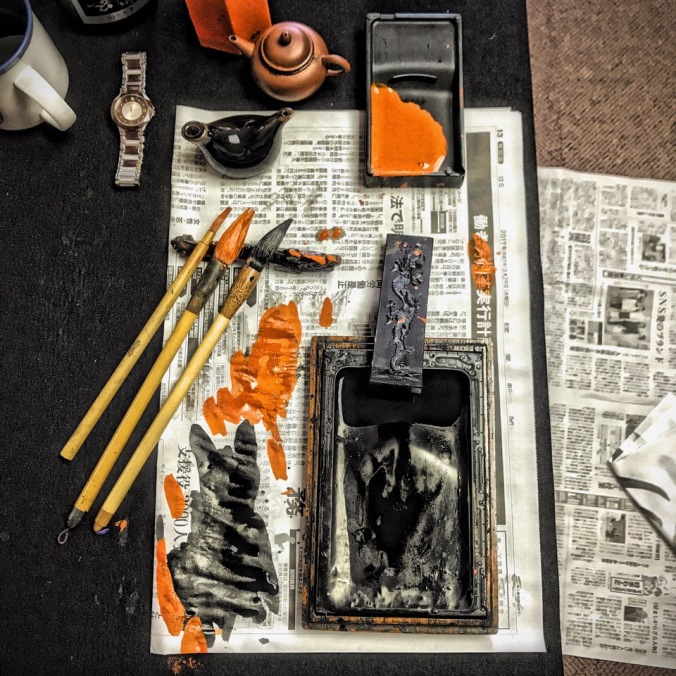 I was able to pick out the Kanji heart/mind, kokoro, because of Shodō classes when I did sutra copying at Saiho-ji Temple in Kyoto last May, which is required before being able to view its famous moss garden.

After the sutra copying, I had noticed repetitive Kanji symbols that friends later told me was mu, nothing.

When I told her about that experience in the next Shodō class, Noriko assigned me the word mu 無. That’s when things started to break free. I began to relax my mind and body, and the brush strokes started to show it.

On the website, Beyond Calligraphy, H.E. Davey writes in Shodo and an Empty Mind : The word mushin (無心) is well known in classical Japanese art forms, where it’s defined as “no mind” or “empty mind.” Both definitions are literal and correct, although they may suggest different things to the average person.

Just as often, mushin is explained as a mental state that allows for greater effectiveness in the performance of a traditional Japanese art. a condition in which action occurs naturally, instantaneously, and without conscious forethought. 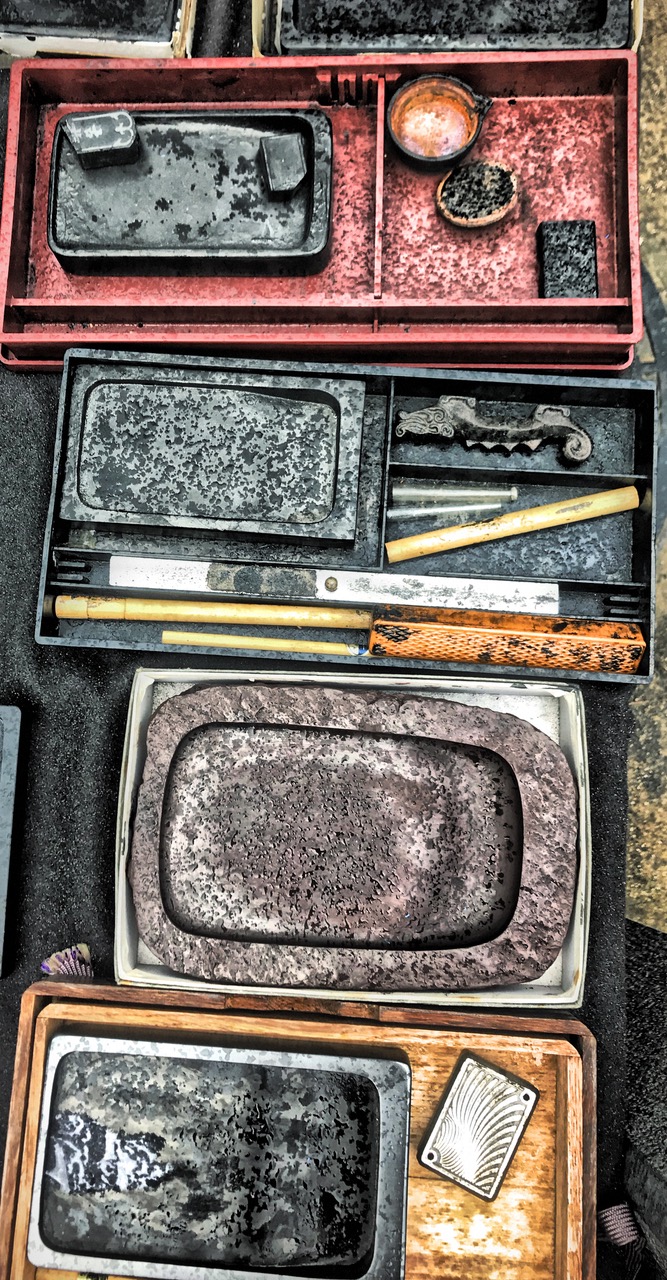 Shodō paraphanalia can be found at temple sales, such as this one at Tenmangu Kitano Shinto Shrine in Kyoto.

In Noriko’s classes, working on more Kanji, such as dream, yume, flower, hana, and poem, uta, I have learned to breathe, relax, find balance, find harmony and elegance in each brush stroke, pay attention to the now and feel, be in my body… such perfect yoga! And how I love this Japanese form of  yoga…. all pure meditation.

Informal meditation is the practice of Japanese calligraphy itself and walking meditation in nature. Shodō itself when done properly is a wonderful meditation in action, the mind becomes clear and calm, as artist Nadja van Ghelue says about the importance of a regular meditation practice. It has been a process to let go of pre-established concepts and strive for makoto, genuineness, sincerity and loyalty to nature and to myself.

As a photographer and paper collage artist, I have always loved paper, so I’m deeply in love with washi and rice paper now, it’s different types and uses. That I don’t need too much black ink for heart, or that the word flower needs a light paper.

I love the materials and brushes, fude, or the ink stone, suzuri, and ink, sumi. The bunchin, paper weight, and the fudeoki, or brush rest. All beautiful in themselves. As each Shodō piece is, revealing the unique style of each artist. 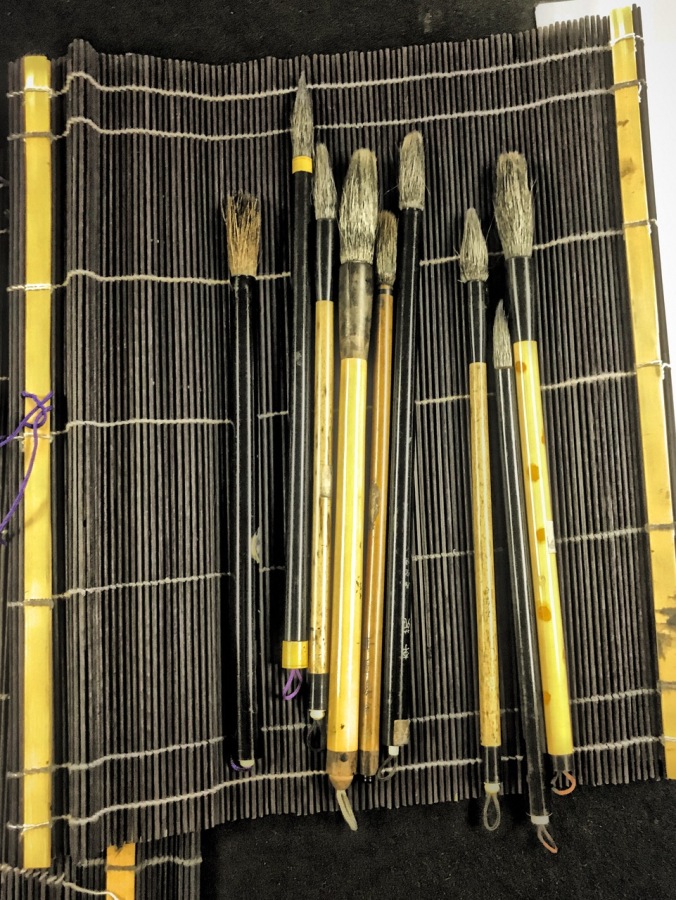 And I adore Noriko. A native of Kobe, she’s been teaching Shodō for 27 years. “I love the smell of sumi, and I love the black and white world. I can relax and concentrate when I’m doing Shodō,” she told me. 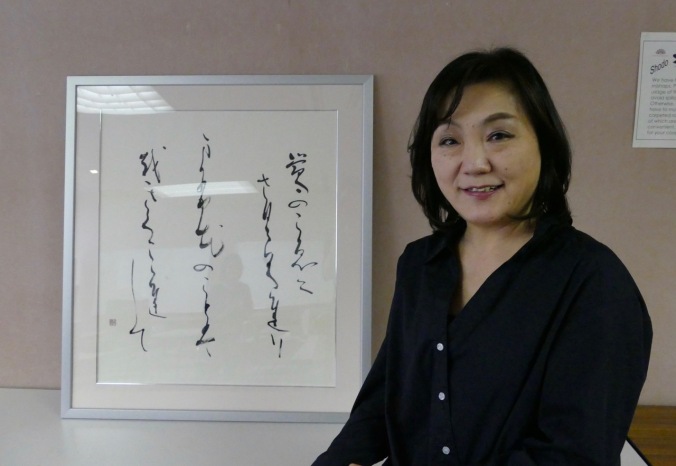 My Shodō Teacher, Noriko Ukita, of Kobe, Japan with some of her artwork.

I learn a lot of Japanese from her in class, too, as she guides my hand, teaches me to sit at the edge of my seat, or critiques my work with her orange sumi-inked brush or by hanging them up on a board to get a closer look. 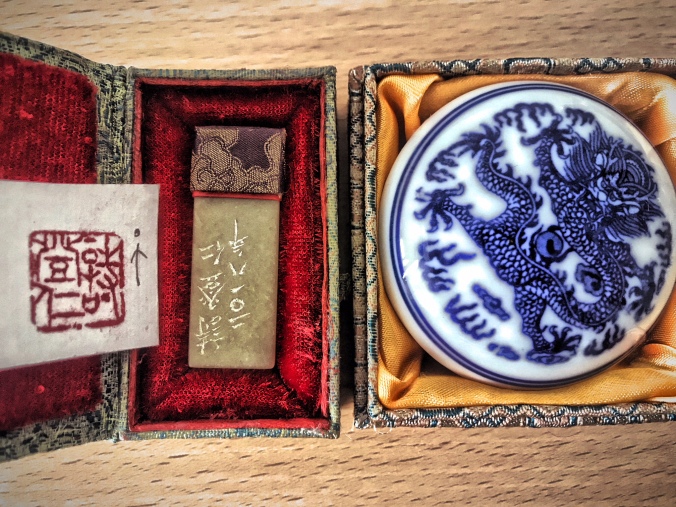 After nearly a year of taking classes, she taught me how to back the paper of my work for thickness to frame. I got a new, high-quality brush made from horse hair, and I now even have my own gain, or elegant stamp. 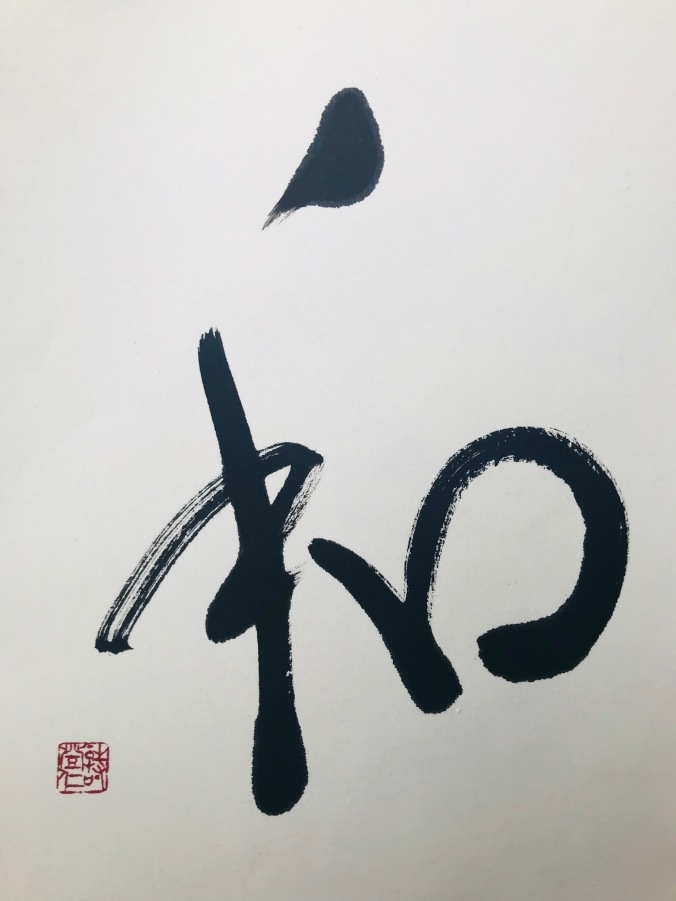 One of the Kanji symbols for peace I created in Shodō class with Noriko, backed and signed with my gain, elegant stamp with my name!

It’s a combination of my name, Sydney, In Katakana as Si-Do-Ni. I selected a combination of words and symbols from some she suggested that each syllable represented. I came up with “poem, up and virtue/benevolence.” And Shodō lends itself well to poets, as all Japanese poets know Shodō to write their poems down.

And so as I am a published poet, and having MCd the Writers in Kyoto Annual Poetry Reading and Improve this past June 24, it was fitting I would write a Shodō Poem with all my words from class:

心 heart   which is the same

夢 dream   that is

無 nothing – that is a

After looking at my finished Shodō work from class, the work I thought was terrible, that was actually very beautiful,  I asked Noriko, “Did I make this?!?!? Is this really mine????” 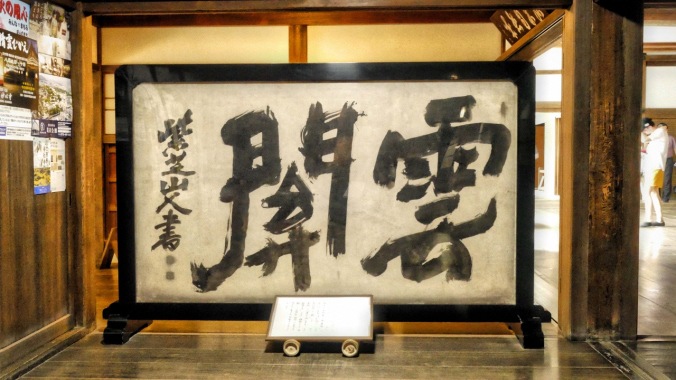 This fall at CHIC, Noriko along with Ikuyo Miki is teaching a washi paper kimono art collage workshop September 20, as well as bringing Craftsman Nagano-San and his son from Kinkoen for a sumi ink gripped black ink experience on November 22. I’m also looking forward to one of her field trips in which we use a giant brush and our whole body to write Kanji. Join us!

Cost for materials: First time experience materials are free. For Shodo materials in a series 4,800¥. 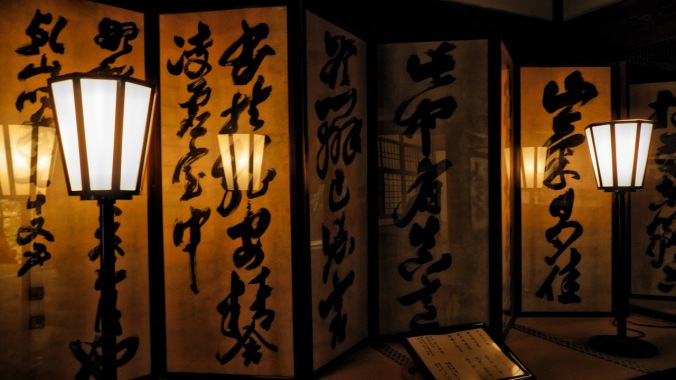 Shodo on panels at Ryoan-ji Buddhist Temple in Kyoto, Japan.

14 thoughts on “Zen and the Art of Relaxing My Body and Mind with Shodō, Japanese Calligraphy” 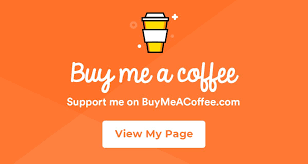