It was an ordinary morning here on the 35th floor of our Shinmachi Osaka apartment June 18, 2018.

We had just returned the night before from a whirlwind two-day tour of Tokyo with my two kids who are visiting from Florida. We were exhausted, and my husband called in sick to work. 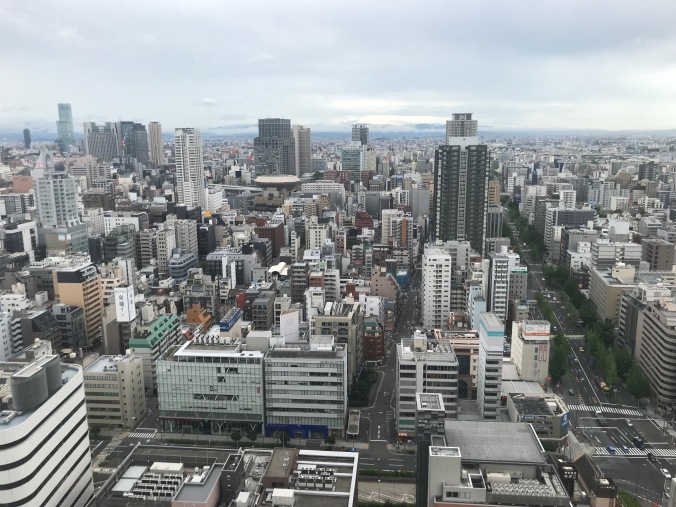 Osaka looking south from our 35th floor Shinmachi apartment 10 minutes after the Osaka Earthquake on July 18, 2018 at 7:58 a.m.

I was in the my studio sending off my Foodspotting article to Kansai Magazine about matcha cafes when a 6.1 earthquake hit!

It was as if I had been jolted on a roller coaster ride at an amusement park with no warning of take-off; at 7:58 a.m. the floor rumbled beneath my feet, the apartment started swaying. My cell phone was knocked to the floor, shouting in Japanese, jishin! Earthquake!

It took a few seconds to realize what was going on, but then I shouted to my everybody, “Earthquake! Get under a table! Cover your head!” Emergency preparedness I had learned. I got under my table, as the surreal events unfolded with more rumbling and rolling and swaying for what I thought was 20 seconds, but likely it was shorter. Seems like an eternity when you are feeling this!

As soon as it stopped, we all got together and I looked out on the balcony below to see what had happened. Few people were on the street and it looked normal except for some bikes toppled over. No collapsing buildings, as I have had in my dreams. I felt the worst was over.

A few ambulance sirens started, but when I took to twitter I learned that a 5.9 earthquake hit Osaka. It was later upgraded to 6.1 on a scale of 7.

It was centered near Takatsuki, Osaka Prefecture, north of our apartment and half-way between Osaka and Kyoto. A 9-year-old girl who left early for school was killed by a concrete wall that fell on her, as well as three others. 300 were injured. 1,600 evacuees are still in shelters and are without gas and water. Authorities say more than 6,000 structures have been damaged too.  My heart aches with compassion for everybody who is suffering. 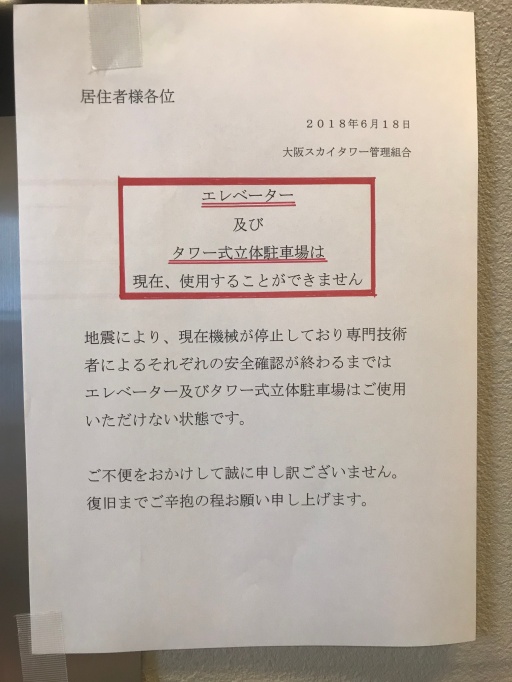 The sign on our elevator door that the Osaka earthquake had put it out of service.

The biggest issue for us was that the elevator was out. Luckily I’m always prepared for disasters!

My late father for years was a Volunteer First Responder for the Boulder Emergency Squad and I had a good friend who is Mormon and took me to her Church’s disaster preparedness events.

I always have extra food and water on hand, so we were OK. My two kids got bored and eventually decided to get some exercise and hit the stairs, reporting back with images of empty shelves and long lines at our local Life grocery store.

My husband was lucky he was at home. He would be stuck at work alone as he always gets there early. He’d also be having to walk back many miles, as all trains shut down. His co-workers reported having to evacuate subway cars and walk back, getting locked out of their apartments in their pajamas, or being stuck on trains for three hours.

Our neighbors were at work early too and were stuck there for a while. Likely we felt quite a bit of jolt and rocking up this high on the 35th floor, but most people, including Japanese, said it was the strongest quake they’ve felt and it scared them. It has been the strongest earthquake in decades. The worst being at Fukushima in 2011 with a 7.3 causing a tsunami disaster and then there was the Great Hanshin Earthquake of 1995 here in nearby Kobe. 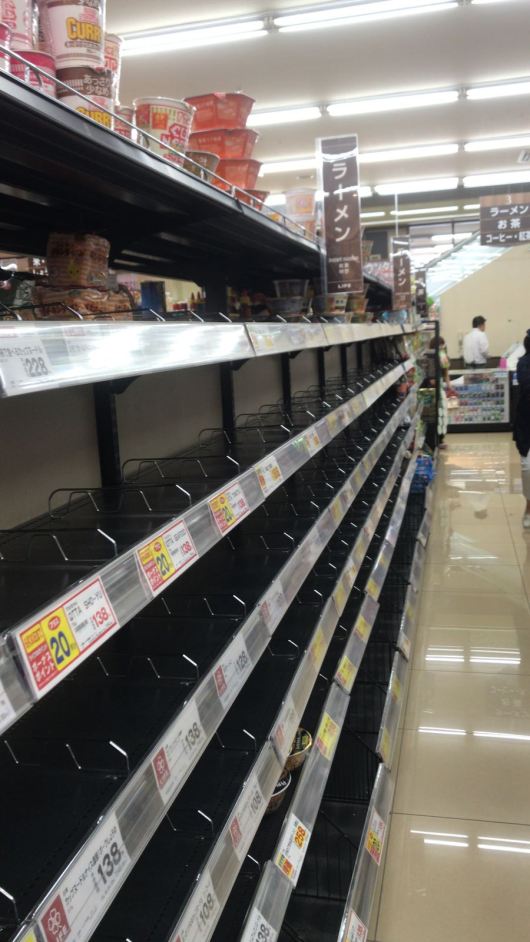 Grocery store shelves were bare at the Life grocery store in Shinmachi June 18 after the Osaka Earthquake. Photo by Paloma Solis

I have felt smaller earthquakes in my life – a 3.1  in Santa Barbara in 1987 when I lived there going to photography school.  It was my first and I remember not having a clue what it was.

Was it the Jolly Green Giant shaking my room? My roommate having sex? I had no idea. but I heard on the radio it was an earthquake offshore.

So I realized what was going on during a 3.2 that I experienced when I worked at Digital Video Magazine in San Francisco in 1996.

I remember I was on the phone in the office when the old warehouse remodeled into an office building began to move and the lights swayed. My older sister and her family went through the San Francisco Earthquake of 1989 that was a 6.9. Her husband happened to be on the roof when it hit. “It was like surfing,” he said. 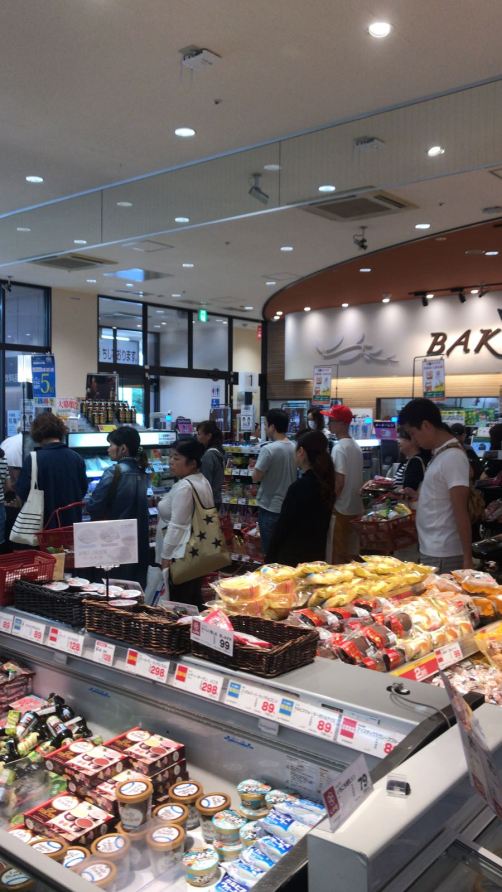 Long lines at the LIfe Grocery store in Shinmachi, Osaka after the earthquake June 18 as people stock up on food and water. Luckily I’m always prepared and didn’t need to. Just my bored kids wandered out for adventure. Paloma Solis.

On Tuesday here in Osaka, we felt some strong aftershocks. They sounded “boom” and some rocking. Very unsettling, no pun intended!

Turns out they were a 3.7 and a 4.6. Ever since I swear I’ve been feeling other aftershocks, as if my bed at night is swaying.

Earthquake sickness is real as people who survived two big earthquakes in Kyushu have been diagnosed.

Last night too, and my husband felt it, as did another co-worker, but nothing really was reported on it that I could find in the press nor Twitter.

When I wandered through Osaka City and Umeda Stations with my kids to go to my bank and to get some train tickets for our next adventure in Japan, it was amazing to see how empty it was in this usually busting mega-complex that used to be a plum field. There have been lots of tour and hotel cancellations, I heard, as people are afraid of a bigger one coming. A friend who works at the Ritz-Carlton Osaka said a lot of rooms were vacant. 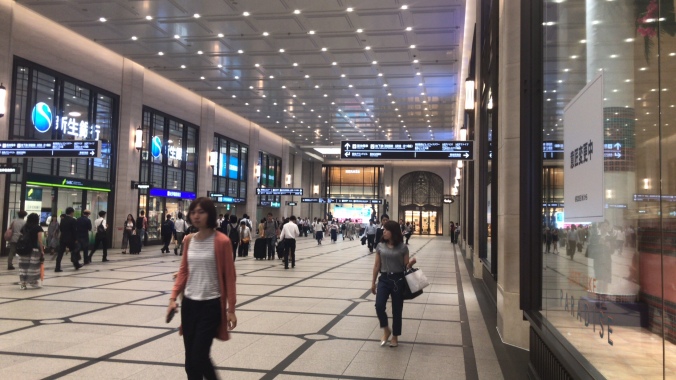 Hankyu Umeda in Osaka remarkably few people on June 19, the day after the earthquake. Usually it is mobbed.

Well, I think earthquakes are scary, but there are a million ways to die. Also I believe in reincarnation, so nothing to worry about! I just noticed that today, June 24 and 25 there is a high risk of earthquake in San Francisco! And my kids left for home this afternoon, via San Francisco! You can’t escape fate, all things are Buddha things and arise from nature, so you might as well float along and show up for it aware of everything you are experiencing.

I will be around here to hopefully survive and be able to help people if a big one does hit!  My chiropractor was so sweet, saying he’s ready to volunteer too when the big one hits, and get to the 35th floor and help us if needed. Disaster does have a way of bringing us all together to show us what’s important in life. 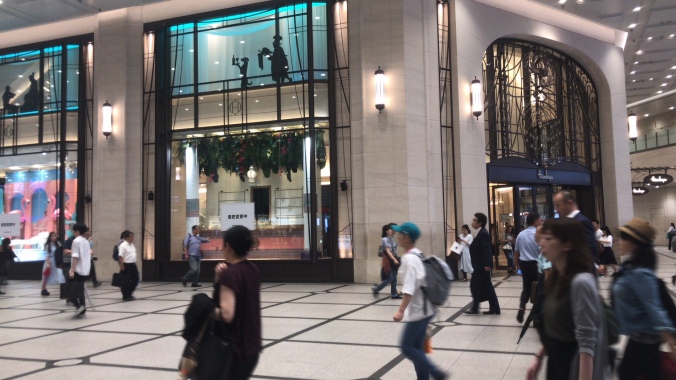 The least people I’ve ever experienced in Hankyu Umeda my year and a half here in Osaka. June 19, after the Osaka earthquake.

I am not leaving Japan, despite earthquakes. I love Japan. People are so nice and everything is so beautiful, clean and kawaii. It’s my home and I find it paradise with a higher-quality of life than in the declining United States. Even though my kids and I all looked at each other every time we felt the rumbling of the Shinkansen in the train station while traveling to Hiroshima this week, wondering if it is the next earthquake, they live in Florida and survived Hurricane Irma last year! But at least you can see hurricanes coming. Earthquakes do keep you on edge. 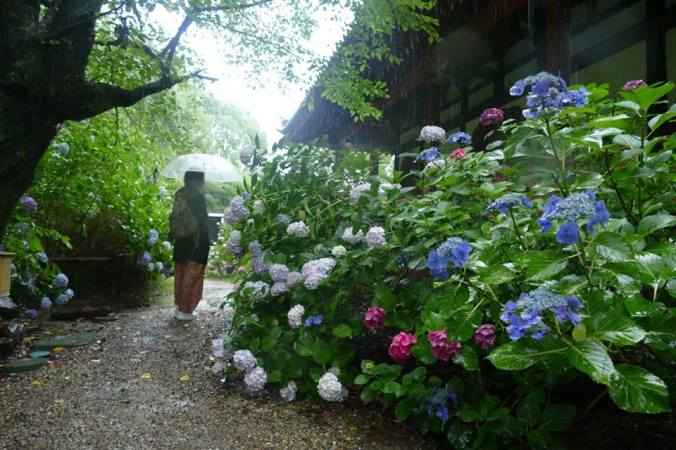 One thing for sure, events like this really wake you up. Everything is so alive. I noticed that when we toured the 400 hydrangea bushes at Kumedera Buddhist Temple in Nara in the rain Wednesday two days after the earthquake. Everything seemed vibrant and incredibly beautiful in the now. I was enjoying nature and was with my great kids whom I love dearly, and I was alive experiencing it.

That’s the power of realizing that death is real. It can happen at any moment. Most people avoid death or are afraid of it. I say contemplate it daily so that you appreciate the now of life!

It got me into gear to start sorting through my photos and post more! Life is precious and death is real, so time to get busy and use this wonderful life and get into action!

8 thoughts on “Earthquake in Osaka”