Upon my first visit to Japan in November 2016 at age 50, I became a filmmaker!

I had started writing a bunch of haiku and tanka poems during this powerful experience, then turned them into video poems.

This Mythic Yoga Journey to Japan Haiku Video No. 1 was the first video I ever made in my life!

I used to work as a professional photographer back in the silver gelatin days, spending many hours in the 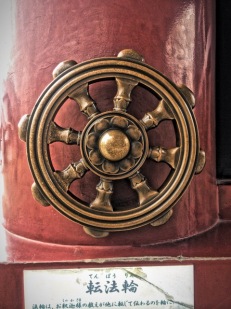 The dharmachakra wheel at entrance of Shitenno-ji Buddhist Temple in Osaka, Japan. The faithful touch and spin its wheel upon entry and exiting. Photo by Sydney Solis.

darkroom for The Photo Works in Boulder, Colorado as well as newsrooms. I was rather slow to adapt to digital and social media. And I’m sure not one to be seen hunching over my I-phone all day posting stuff instantly or answering messages immediately.

Luckily technology has made it easy for people like me to make videos!  I’ve been getting better slowly. You can see from other YouTube movies I’ve made, such as Shitennō-ji Buddhist Temple here a short distance from our apartment in Osaka. Check out and subscribe to my YouTube channel for more. I will be posting more over time!