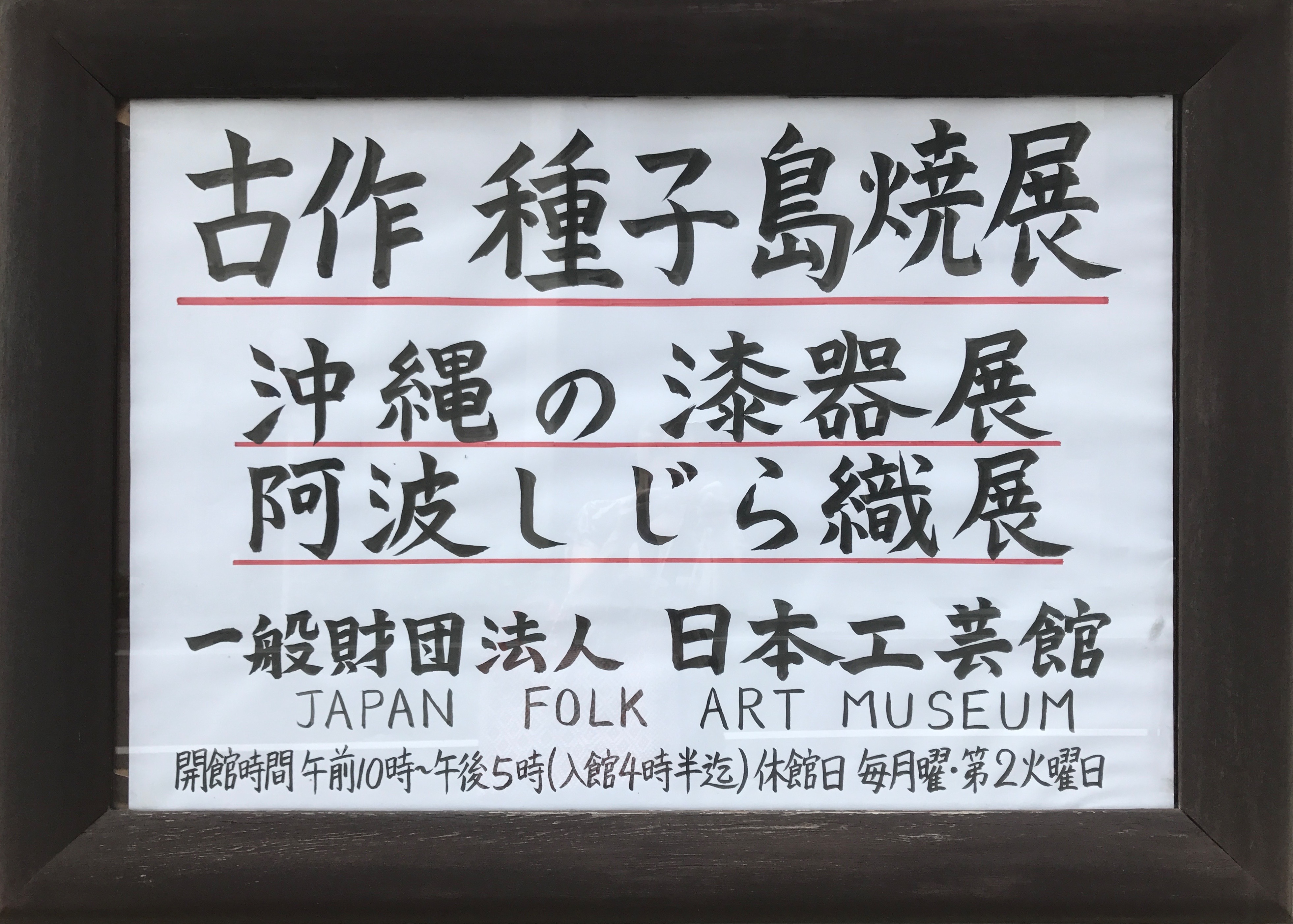 I am a folk junkie. I love folktales, folk art, folk music. Folk comes from the Old English folc, common people, men, or tribe; originating from the Proto-Germaic root of fulka with its modern German word volk, people. In an era where people’s cultures, crafts and minds are getting swallowed up by the mechanized, mono-cultural isolation of the smart-phone, I believe connecting to and preserving folk arts and crafts will save civilization.

In search of folk art that leads to a beautification of the life of people and even a renaissance in these dark times, The Japan Folk Art Museum was one of the first stops on my list living here in Osaka.

A 10-minute walk from the Namba station in Nishi-ku, the Japan Folk Art Museum was established to preserve and promote the creation of Japanese traditional handicrafts, which have been developed over centuries and used in the daily lives of ordinary Japanese. 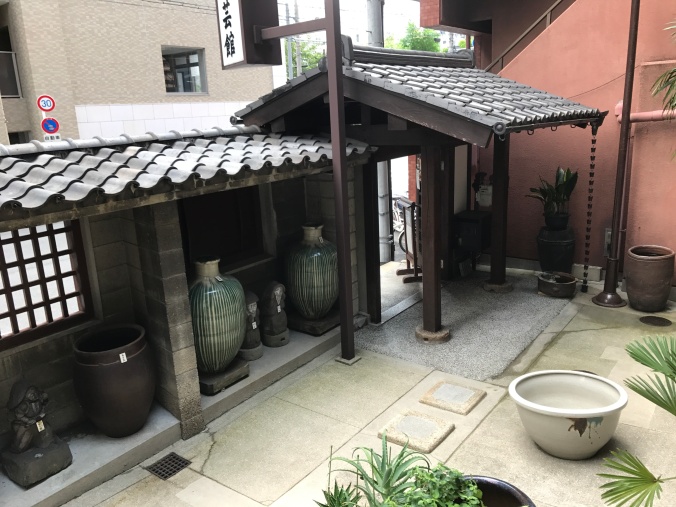 The Japanese folk craft, or Meingi Movement, challenges the idea of what art is. It focuses on the overlooked beauty of art and crafts made by people that are practical and used in daily life. It espouses that art does not have to be something expensive and made by famous artists but made by average people to infuse their everyday life with beauty, art and quality. The Japanese believe the deep spirit of their culture is reflected in their art and their handicrafts have become world renown. 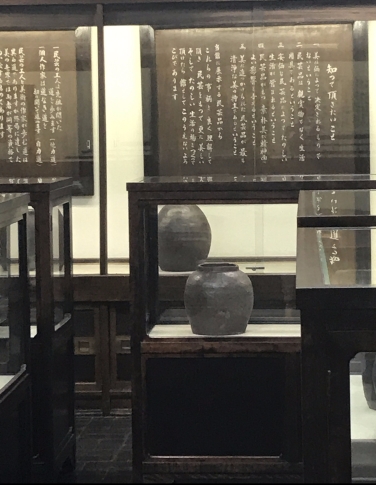 Muneyoshi Yanagi is widely accepted as the founder of the Japanese craft movement, which began around 1927.

Yanagi traveled around various areas in Japan and one of the first things to capture his eye was the folk Buddha, an Edo period sculpture called Mokujiki.

He gradually began paying attention to the honest beauty which he found in ordinary people’s handicrafts made by unknown craftspeople.

Yanagi’s son Sori Yanagi espoused the philosophy “Contemplate by hand; Create by heart.” I think that’s a lovely term, as the working with one’s hands and creating crafts and objects one uses in every day life really provide meaning and satisfaction in a mechanical world in which everything is done for people. 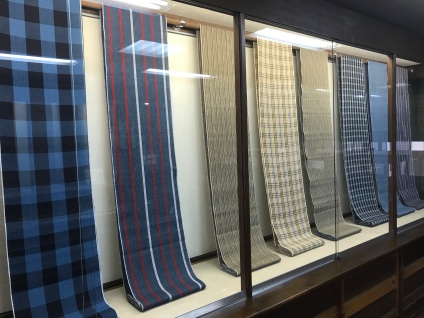 Textiles on the second floor of  the Japan Folk Art Museum

Kogei are the traditional arts and crafts of Japan, which originally were seven categories: ceramics, lacquerware, dolls, woodwork, bamboo, textiles and metalwork.

These crafts became pots, cups, folk toys, even bento boxes and more which infuse everyday life with beauty and enrichment. Many of these examples filled the museum when I visited the quiet space, and the museum offers several exhibitions a year. 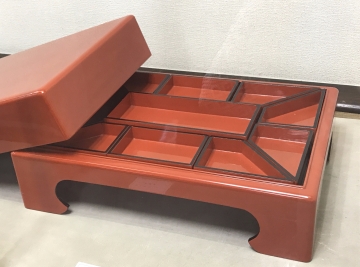 A laquered bento box exhibition was on display in the Japan Folk Art Museum when I visited.

These handmade crafts are a nice offset to the Ikea or Wal-mart culture of mindless mass production and meaninglessness as well as a cure for melancholy, in my opinion. 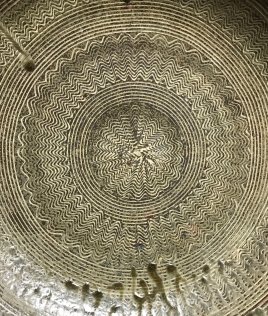 An example is the term boro, which means “worn down or ragged,” to describe a building or clothing, or it can refer to the tattered clothes themselves. It doesn’t focus on fine silk worn by the upper classes, but the aesthetics and beauty in the cotton and hemp clothing worn by peasants, especially in the northern territories of Japan.

It started during the Edo period, in which people found innovative ways to recycle and reuse everyday objects, primarily out of necessity. 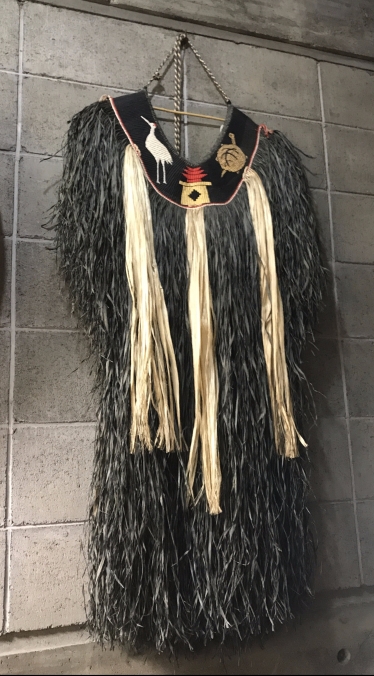 Shaman’s outfit, and example of boro, hanging on the wall of the Japan Folk Art Museum

I enjoyed meandering through the old wooden building, climbing up the narrow stairs and gazing at pottery, textiles, bento boxes and I especially loved the gift shop, which was replete with ceramics and fun folk toys.

I picked up a nice fish matryoshka made from washi paper, a toy top as well as some sturdy handmade dish towels made from recycled mosquito netting.

Apart from those central government affiliates, local governments are extending support to reinvigorate the kogei art scene as well.

A fish matryoshka made of washi paper I picked up at the gift shop at the Japan Folk Art Museum in Osaka. 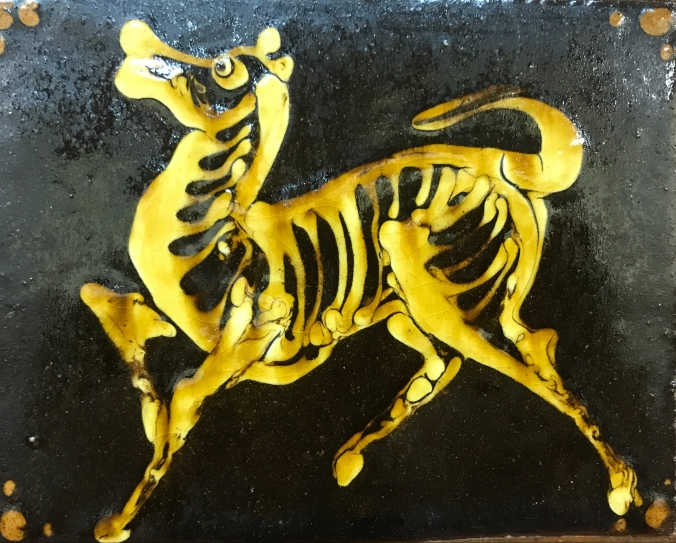