Schizophrenics tend to live in cities, research shows.  Grow up in a city and you are more likely to have psychosis, and urban life can lead to depression and anxiety. Anxiety and busy being etymologically the root word of “business,” by the way.

Nepenthes ventricosa, a type of Venus fly trap endemic to the Philippines.

No doubt, the constant stimulation of the mind, the hurry, hurry, go-go-go mentality of capitalism and its relentless economic matrix spun around personas congregating in cities never allow the mind to rest.

Ideas, information, social media that disembody us and take us to virtual realities not grounded in the here-and-now reality all can cause dis-ease. Sounds like insanity to me!

I love the city. I have loved living in Buenos Aires and now Osaka. I’m either in a city or a farm, never suburbia, which is especially soul-killing.

I remember my late sister, who was a reference librarian at the Parker, Colorado public library, told me in 2007 that the number-one book patrons checked out was Dave L. Goetz’s Death by Suburb: How to Keep the Suburbs from Killing Your Soul.

The answer to soul-sucking city and suburbs? Nature. In Buenos Aires walking along the Rio de la Plata river’s lagoons and waterways lined with beautiful pampas grass in the  Costanera Sur Reserva Ecologia and other parks gave me and the kids a needed respite from this amazing, yet intense city.

Photo of man with the parasitic Rafflesia plant of South East Asia.

And then we lived for 2 1/2 years on the island of St. Croix in the U.S. Virgin Islands  communing with the depths of nature so much I could hear the banana trees growing.

It was great for me, until crime exploded and the island shut down because of the Hovensa Oil refinery closure, so we moved to Florida.

In Osaka I headed to Sakyuya Konohana Botanical Garden yesterday. Being here full-time for over six weeks I have missed my huge vegetable and flower garden back in Florida and the clarity it brings my mind to walk daily afternoons through it after writing all morning.

In Osaka I have purchased a few small plants and cut flowers from a local shop to decorate the house and satisfy my green thumb. Hana,花, is the word for flower in Japanese. But what really drew me to the Sakuya konohana Botanic Garden was the carnivorous plant exhibit that runs until September 9. 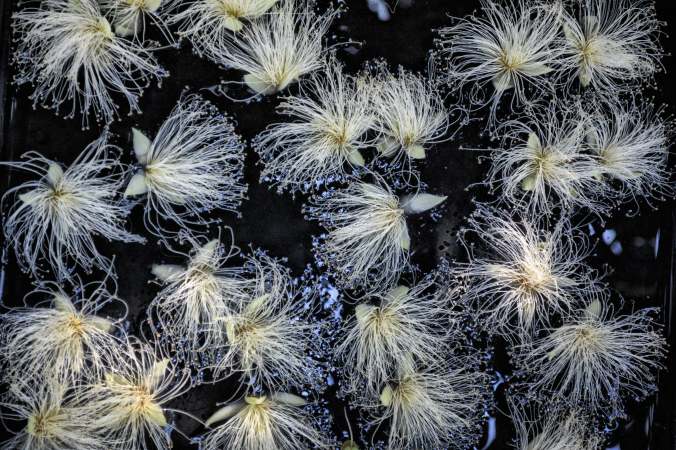 The poster in the subway caught my eye. The graphic designer implicitly knew the plants resembled vaginas, yoni, and even had clitoris-like appendages. The posters were also in the subway cars. Now in the United States the Starbuck’s mermaid logo can’t even have a belly-button due to the ire of some Colorado Christian women who made the company take it out.

No such prudeness and fear of nature and life in Japan, where its culture is aligned with nature. Where sex is sex and bodies are bodies, roaming nude in the onsen hot springs is nothing sexual, it’s just nature. Nothing to be ashamed of or get uptight about. Marilyn Monroe got it right when she said, “Sex is part of nature, and I go along with nature.”

Nature is nature, and for whatever bizarre reason patriarchy and artificially contrived religions have intentionally obscured the original matriarchy cultures such as Greeks, Celtics and even Japanese Shinto to shame the natural world, the body and women is beyond me.

I’ve learned that Miko were originally priestesses but have been demoted over the centuries by the patriarchy, and Kabuki theatre even was originally played by women telling sexually bawdy songs and chants until men banned female performing to this day!

I’m sure it’s why we have endless war, militarism and machines doing everything. Sacred woman or nature is something to be destroyed and controlled, not to take pleasure in. Small wonder the Dionaea muscipula plant I bought at the garden has the common name of Venus flytrap – bringing up mother complex and her paradoxical mythological undertones. She’s the unresolved anxiety over sex and death. Mother Nature is the womb and the tomb. She’s not just a life-giver but also the devouring mother, a vagina with teeth. Carnivorous plants!

But Psychologist Carl Jung said that a neurosis is just a God that is offended and hasn’t been listened to yet.

And in this case it’s the Goddess herself. Sacred woman, or sacred prostitute, an entire archetype that has been repressed in the recesses of humanity’s psyche, demonized and split off from itself and driving everyone insane.

Just read the newspaper headlines and it can’t be more clear, as North Korea fired a missile over Japan yesterday morning and Trump is more inflamed and insane than ever!

Now the plants at the carnivorous exhibit seemed very innocuous, even past their bloom this late in the show by the time I saw them. They weren’t the red-lipped plants with a gorged hood shown in the beautiful posters. There was a preserved display of a Rafflesia behind glass and some info on this parasitic plant found in SouthEast Asia that seemed to be able to devour a man looking at it in the poster. But that was about it. 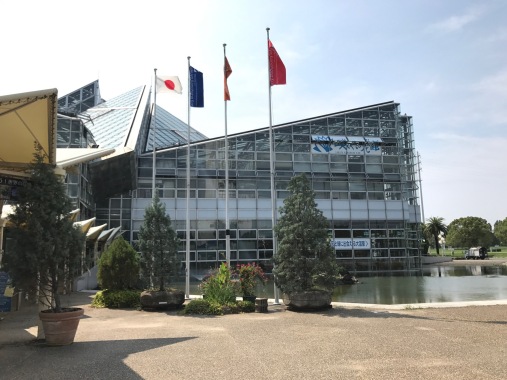 The building itself is of gorgeous architecture, circular in design, spiraling upward through the interior gardens’ various ecosystems, from humid tropical plants and flowering trees to cacti of Australia to Arctic plants.

Just spending a few hours here gazing at greenery and flowers that has calming music playing suspends the mind’s ceaseless wanderings and ruminations.

The world of economics and politics, work or other mundane world activities cease, as nature divine and pitches you out into a sense of timelessness and renewal, relaxation and unity.

Even Tsurumi Ryokuchi Park reached by getting off at the Tsurumi-Tyokuchi subway exit, is a pleasure to stroll through, where there is a happy sight of dozens of moms and their preschool children picnicking beneath trees and splashing in a gorgeous fountain in the afternoon heat.  The park was the site of The International Garden and Greenery Exposition in 1990 that featured the beauty of flowers. The subway replete with mosaic tiles on the walls of butterflies and flowers, even at your feet.

Aligning with nature. It’s a good thing. Next time you think of your body’s physical health, think of your mental health too. Spend some time forest bathing or at a botanic garden near you. It will save your sanity or at least renew you to return to your urban abode refreshed, calm and relaxed.

Closed: Mondays (next weekday in case of holiday) and New Year’s Holiday (December 28 to January 4)

Admission: 500 ¥ for adults. Free for junior high school students and below, handicapped (including one caregiver), and seniors over 65 who live in Osaka city.
Group discounts available. 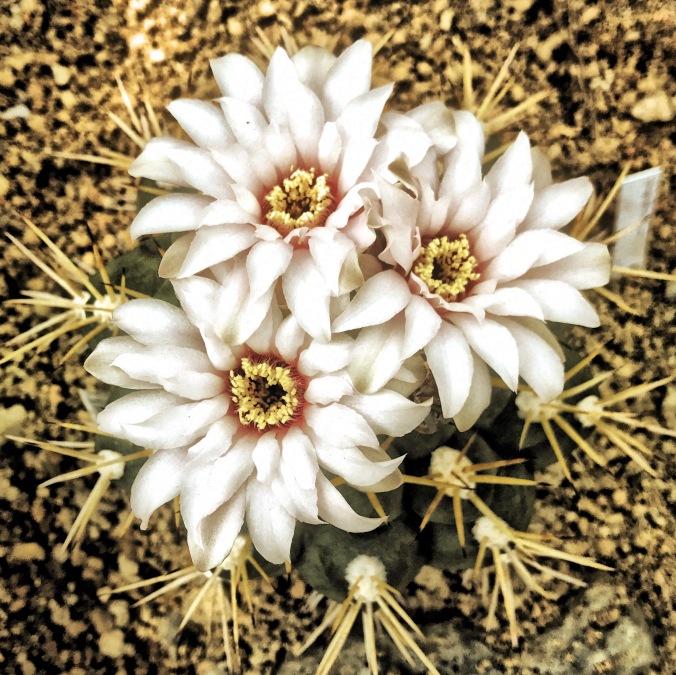 Detail of the parasitic Rafflesia plant of South East Asia.